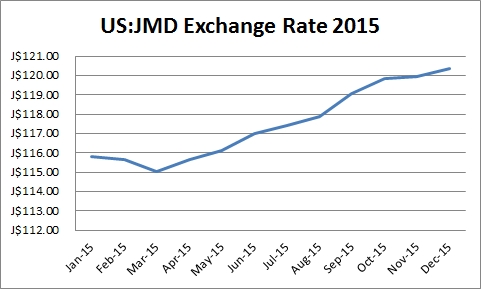 Since the beginning of the IMF EFF deal in 2013, the Jamaican dollar has lost 21% of it’s value, going from trading at US$1 for J$99.45 to J$120.34. The devaluation of the Jamaican dollar over this period of course was expected, as it was a central tenet of the IMF arrangement. This policy nevertheless has had deleterious effects on the economy through building the debt stock held in foreign currency.

However, for many the expected long term effect of the policy will be positive. As such, in November, Brian Wynter, the BOJ Governor, reported that the dollar is no longer overvalued, and is less susceptible to unpredictable slippage indicating economic stability rather than cause for alarm. Nevertheless, January of 2016 has seen the dollar depreciate further to US$1:J$121, putting many on edge about the veracity of claims of stability.

With an improving macroeconomic environment, will Jamaica be able to increase productivity and output enough to reap the benefits of a weak dollar or will the negative effects on debt stock and import prices overwhelm this possibility? You can read our previous features on depreciation including To Dollarise or Not To Dollarise and Jamaican Dollar Depreciation Facts and chime in to let us know your thoughts.

Look out for the next instalment of our economic year in review feature on Wednesday.