For the year, the general movement of prices included two months of deflation followed by 10 months of inflation. In these 10 months, inflation persisted at low levels, with no individual month reaching 1% inflation or higher.

The months July and August accounted for the highest inflation rates, with both recording 0.8% inflation. In these months, Jamaica was most severely affected by the drought and dealt with the consequences, including higher food costs. In fact, July and August saw the subcategory “vegetables and starchy foods” increase by 9.7% and 8.5%, respectively.

In spite of this, the opposing effect of declining crude oil prices managed to keep inflation for the year low. Throughout the year, the subcategory “housing, electricity, gas and other fuels” showed decline in 7 non-consecutive months, tempering increases in other aspects of the CPI basket.

Also of note, the subcategory “education” recorded a 5.3% increase in September due to increasing school tuition costs at the start of the 2015-2016 school year.

For the year as a whole, Jamaica recorded a 3.7% inflation rate, the lowest in more than 10 years. 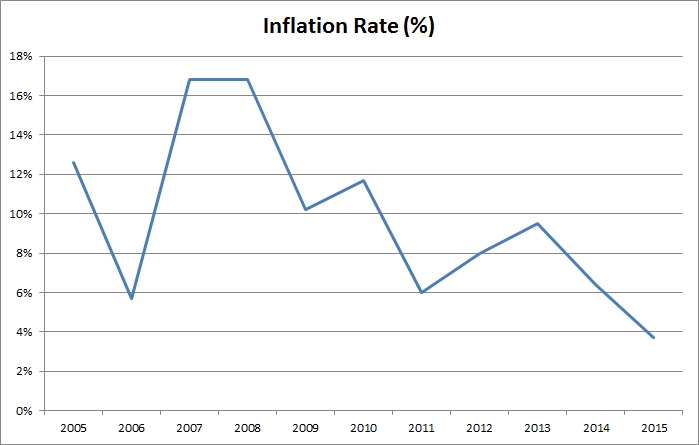 Do you think  low inflation rates will continue through to 2016? In any event, diGJamaica will be sure to keep you updated on price movements throughout the year.