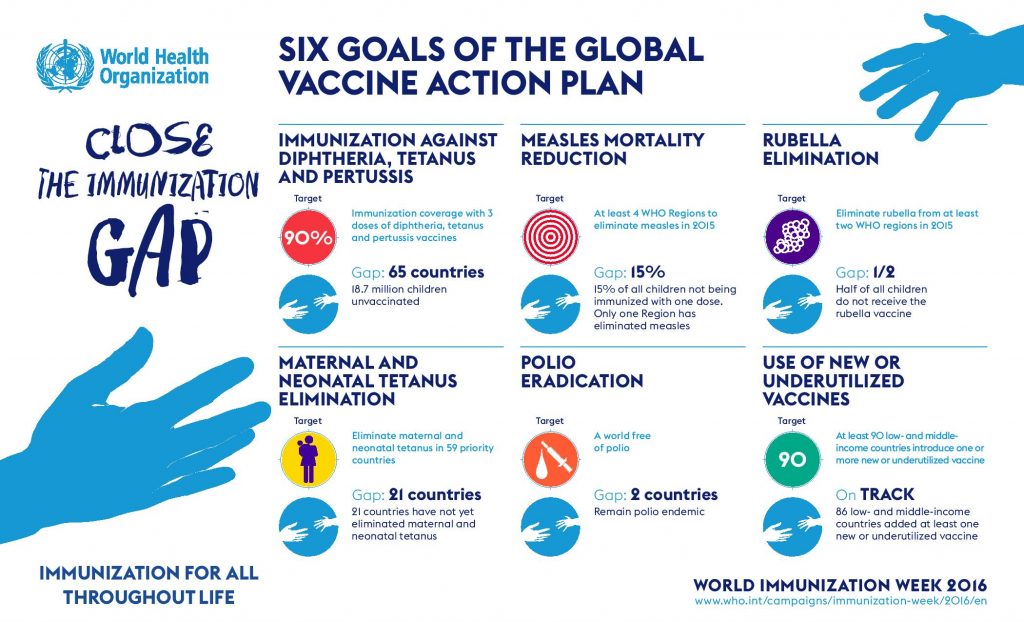 It’s World Immunization Week, which got underway on April 24th and runs until the 30th. The theme for this year is ‘Closing the Immunization Gap.’ The World Health Organization (WHO) informs us that immunization averts an estimated two to three million deaths annually from diseases such as diphtheria, tetanus, whooping cough, and measles. However, a further 1.5 million deaths could be avoided if global vaccination coverage improves. This is because an estimated 18.7 million infants worldwide are still missing out on basic vaccines for preventable diseases. Vaccines are weakened or killed pathogens that help your immune system fight diseases. They do not make you sick, but prepare your body to fight off diseases when exposed to full strength pathogens in the future. Vaccines boost the immune system’s power to fight off more than 20 different vaccine-preventable diseases.

Coincidentally, it is also Vaccination Week in the Americas (VWA), currently in its 14th year of observance. The theme for VWA 2016 is ‘Go for the gold! Get vaccinated!’ According to the Pan American Health Organization (PAHO), it was prompted by a measles outbreak in Venezuela and Colombia in 2002. It became an annual, hemispheric initiative in September 2003. The primary objectives of the initiative are to strengthen the regular immunization programs in the Americas and to identify and reach populations most at risk of contracting vaccine-preventable diseases, due to lack of access to services or resources. Nineteen countries participated in the first VWA in 2003, and Jamaica has been observing VWA since then.

Jamaica has achieved a number of significant immunization milestones dating back to the 19th century (see next page). As the Ministry of Health works on maintaining the country’s immunization track record, attention is now focused on improving access to non-traditional forms of vaccines to the Jamaican population. These include vaccinations for non-communicable diseases (NCDs) such as cervical cancer, which is caused by the human papillomavirus (HPV). the country’s ‘Expanded Programme on Immunization’, many strides have been made in reducing illnesses and deaths from vaccine-preventable diseases such as polio, measles, diphtheria, whooping cough and newborn tetanus.