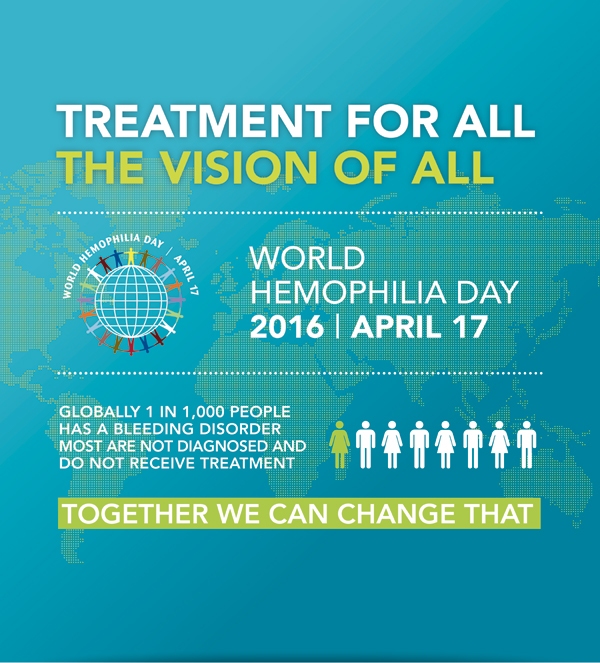 World Hemophilia Day will be observed on Sunday, April 17. The day is observed annually to raise awareness about hemophilia and other inherited bleeding disorders. According to the World Federation of Hemophilia, one in 1,000 people has a bleeding disorder globally. Most cases are not diagnosed, and therefore, do not receive treatment.

According to the US-based Centers for Disease Control and Prevention (CDC), hemophilia is an inherited bleeding disorder in which the blood does not clot properly. This can lead to spontaneous bleeding, as well as bleeding following injuries or surgery. Blood contains many proteins called clotting factors that can help to stop bleeding. People with hemophilia have low levels these factors. The severity of hemophilia that a person has is determined by the amount of factor in the blood.

There are several different types of hemophilia, but the most common are:

These types are inherited in an X-linked recessive genetic pattern, so males are commonly affected while females are usually carriers of the disease.

Hemophilia can result in:

Common signs of hemophilia include:

About one-third of babies who are diagnosed with hemophilia have no other family members with the disorder. A doctor might check for hemophilia in a newborn if:

Those with severe hemophilia can have serious bleeding problems right away. Thus, they often are diagnosed during the first year of life. People with milder forms of hemophilia might not be diagnosed until later in life.

There is currently no cure for hemophilia, but there are treatment options available. Approximately 75 per cent of people with hemophilia around the world still receive inadequate treatment or have no access to treatment.

These products can be used as needed when a person is bleeding or they can be used on a regular basis to prevent bleeds from occurring. Read more about treatment options here.