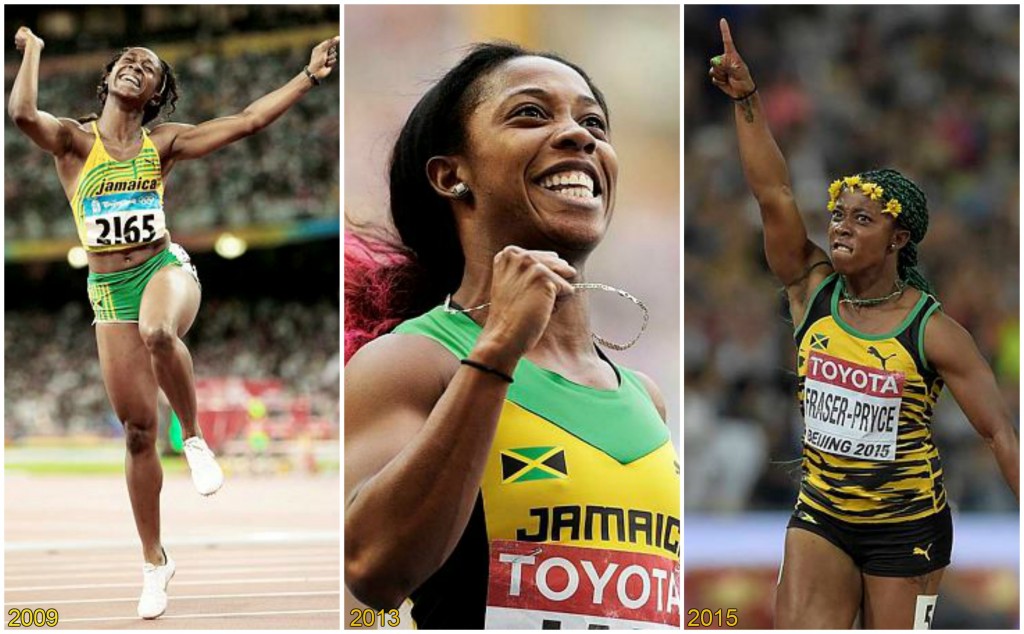 Shelly-Ann Fraser-Pryce this morning underlined her position as one of the greatest sprinters of all time when she clocked 10.76 seconds to claim her third World Championship title. In doing so, she became the first woman to hold three 100m titles. With her black and green braids adorned with a yellow sunflower headband, she led from the gun to the tape and even had a little room for some ‘showbolting,’ raising her index finger before crossing the finish line.

Fraser-Pryce has decided not to defend the 200m title she won in Moscow and will rest until it’s time for the 4x100m event. Let’s take a look at her record at the World Championships:

2007 – Osaka, Japan: The then unknown sprinter was part of the silver medal-winning 4x100m team, running in the heat.

2009 – Berlin, Germany: A star on the rise following her surprise 100m victory in the 2008 Beijing Olympics, she added the World Championship title to her collection in a time of 10.73 seconds. She also ran a stellar second leg in the 4x100m relay, helping the team to a gold medal.

2011 – Daegu, South Korea: It was a rough year for the defending champion as she was plagued by injury. She finished just outside of the medals in fourth in her pet event, clocking 10.99 seconds. However, she recovered enough to help the 4x100m team to a silver medal and new national record, running the first leg.

2013 – Moscow, Russia: She entered these championships on a good note, having defended her Olympic 100m title in London 2012 and collected silver medals in the 200m and 4x100m relay. However, she had to beware the challenge of Nigerian standout Blessing Okagbare. In the end, all threats were neutralised as the Pocket Rocket created history, becoming the first woman to claim three world titles – 100m, 200m and 4x100m – at the same meet.