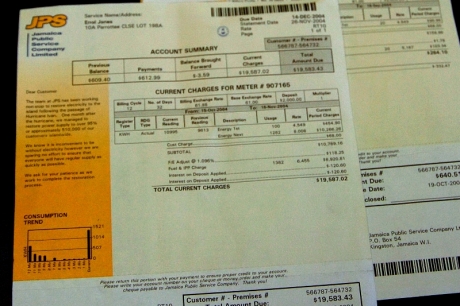 The Jamaica Public Service Company Limited (JPSCo) has been making headlines since the start of the new year, when its request for a 21 per cent rate increase was denied by the Office of Utilities Regulation (OUR). But that was not all, as the power company was actually told to reduce its rates by an average of two per cent. This was first hinted at last November, following consultations on JPS’ proposal in April 2014.

This has again stirred up the national conversation about Jamaica’s high light bills, and whether or how we can get these rates down.

Jamaicans pay one of the highest average electricity prices in the world – approximately $38 (US$0.35) per kilowatt-hour (kWh), according to 2013 figures, which had increased to between 40-41 US cents per kWh in 2014. Annually, the government spends some $14 billion on power.

There are several factors that contribute to the high prices, including fuel costs, construction and maintenance costs for power plants, maintenance on transmission and distribution lines, and regulatory decisions. A 2013 study undertaken by the Caribbean Policy Research Institute (CaPRI), Electricity Prices in Jamaica… Why Are They So High? revealed that the main non-fuel culprit behind our high light bills is inefficient generators, followed by costs passed onto customers from electricity theft and JPS’s inefficient plants.

Read the findings of the study for more information on the impact of policy decisions on JPS pricing, best case electricity rates for Jamaica and more.