The women’s field is a little more diverse, with three sports represented – track and field, swimming and boxing. 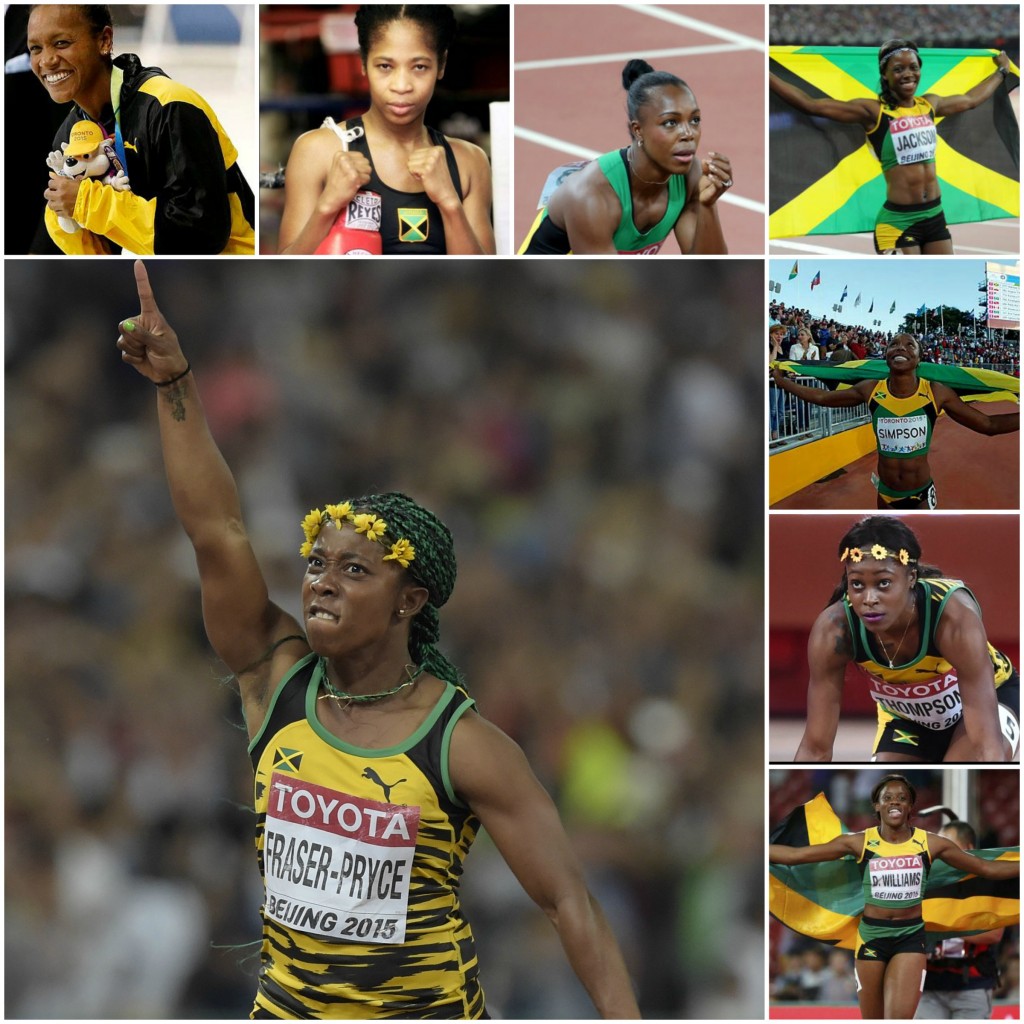 Alicia Ashley – On October 29, 2015 Alicia ‘Slick’ Ashley defeated previously unbeaten Irish boxer Christina ‘Lightning’ McMahon for the vacant WBC women’s super bantamweight title. A pretty remarkable feat, considering the fact that she is 48 years old! Yes, you read that right. At the time of her victory, Ashley was 48 years, 81 days old, which gained her a spot in the Guinness Book of World Records as the oldest female boxer to win a major boxing title.

Alia Atkinson – Following an outstanding, record-setting 2014, our ‘water baby’ continued to shine in 2015, winning a 100m breaststroke silver medal at the Pan Am Games, where she also set a new national record of 1:06.59 seconds. Atkinson would lower that record to 1:06.21 seconds on her way to the finals of the women’s 100 metre breaststroke at the swimming world championships in Kazan, Russia a few weeks later. That was the first long course World Championship final for any CARIFTA region female swimmer in this event, and she finished third. A silver medal in the 50m breaststroke in a national record 30.11 seconds in Kazan helps to cement her as one of the favourites for the title, which she also won last year.

Veronica Campbell-Brown – The 2015 season wasn’t particularly stellar for VCB, but when you know how to win like she does, a podium finish is never out of the question. We had our hearts in our throats after the women’s 200m semi-final at the IAAF World Championship in Beijing, China, as the experienced VCB found herself sprinting to the finish line in someone else’s lane. However, she wasn’t disqualified as the other athlete wasn’t impeded. Things were set aright in the finals, as VCB came through in third place to claim the bronze medal in 21.97 seconds, behind Dutch winner Dafne Schippers and countrywoman Elaine Thompson, who won silver. It was icing on the cake when she returned to help the women’s 4x100m team to a gold medal and championship record of 41.08 seconds. Was it enough to claim the title for the sixth time?

Shelly-Ann Fraser-Pryce – The ‘Pocket Rocket‘ had an outstanding season, dominating the 100m on the Diamond League circuit and retaining two of the three World Championship titles she had won in Moscow, Russia in 2013 (she opted out of the 200m). In imperious form, Fraser-Pryce stormed to finish line in the 100m in 10.76 seconds, finger pointed to the sky in a rare moment of ‘show-Bolting.’ This was her third world 100m title after previous triumphs in 2009 and 2013 and was her 5th title in the last six major championships. She capped the championships off with a blazing anchor leg in the 4x100m relay as Jamaica took gold in a championship record of 41.08 seconds. This golden girl is looking like the favourite to win the title this year, which would be her third.

Shericka Jackson – The former Vere Tech champion made her debut in the ‘big leagues’ in convincing fashion, claiming bronze in the 400m in Beijing in a personal best 49.99 seconds. She added a gold medal to her tally in the 4x400m relay, as the team of Jackson, Christine Day, Stephanie Ann McPherson and Novlene Williams-Mills outclassed the field to win in 3:19:13.

Sherone Simpson – Many Jamaicans might have written her off following a doping infringement that scuttled her 2013 and 2014 seasons, but Simpson steadily worked her way back into good shape after being cleared in June 2014. A little over a year later, she was rewarded when she stormed through late to win the gold medal in the women’s 100m at the Pan American Games in Canada on July 21. She also added World Championships gold to her tally as a part of the women’s 4x100m relay team in Beijing. The “comeback kid” is definitely a strong contender for the title, which would be her second.

Elaine Thompson – The new kid on the block had an outstanding season, winning the 200m National Championships and then smashing the great Merlene Ottey’s Sainsbury Anniversary Games record of 22.24 seconds prior to the World Champs. Thompson looked set to win the World Champs gold coming off the curve, but the fast-finishing Dutchwoman Dafne Schippers would not be denied and Thompson took silver in a personal best 21.66 seconds, the fastest Jamaican woman since Ottey. She ran the second fastest time in the world for the past 17 years and became the fifth fastest woman over the distance, and was just two-hundredths of a second outside of Ottey’s national record of 21.64 seconds. This time also makes her faster than multiple 200m gold medallist Allyson Felix of the USA (21.69 seconds PB).

Danielle Williams – She had announced her presence to the world last July, winning the World University Games 100m hurdles crown in 12.78 seconds. However, most of us never saw Williams coming. During the World Champs finals, she got off to flying start and stayed with the leading pack in the middle lanes, pushing her way to the front as she smoothly cleared each barrier. It was all over by the time they crossed the final hurdle as she dipped for the line, snatching the title in a personal best 12.57 seconds. In her wake was the defending champion Brianna Rollins (USA) and favourite Tiffany Porter (Great Britain). Big sister Shermaine finished seventh in 12.95 seconds. We will surely be keeping an eye on our very own Williams sisters going into Rio 2016.