The Tambourine Army is equipping its soldiers with the knowledge to more effectively deal with the abuse, rape, and all other forms of sexual violence against women and girls. – Imani Duncan Pryce

On its Facebook page, the Tambourine Army describes itself as: “a radical social justice movement committed to uprooting the scourge of sexual violence and safeguarding the rights of women & girls”. Since their genesis on the Jamaican scene, they have (individually and collaboratively) staged several events with a militant focus on ending sexual violence and abuse against women and girls.

The group first came to the nation’s attention on Sunday, February 8, 2017 when 14 women staged a peaceful protest at the Nazareth Moravian Church in Manchester, rallying support for a 15-year-old St Elizabeth girl allegedly abused by the pastor of the congregation. (See a timeline of the events surrounding the Moravian Sex Scandal here.) One of the protesters, who went by the moniker ‘Stella Gibson’, reportedly used a tambourine to slap then leader of the Moravian Church in Jamaica, Dr Paul Gardner, in his head. The hashtag #TambourineArmy became popular on Jamaican social media, in reference to the incident, but also in light of the perceived need to do more to protect women and girls from abusive predators. The Tambourine Army Facebook page was started on January 9, 2017.

As more allegations of sexual abuse by ministers came to light, and after a spate of gruesome murders and reports of domestic violence killings in Jamaica in 2016, support for the #TambourineArmy has continued to increase, with growing visibility and support from “soldiers”, especially on social media. The Army has hosted several events, culminating in a Survivor Empowerment March on Saturday, March 11, 2017, where they presented the Army’s 20-Point Action Plan for Soldiers.

Here’s a timeline of news reports in The Gleaner (and other overseas publications) surrounding the Tambourine Army.

A group of 14 women stage a peaceful protest at the Nazareth Moravian Church in Manchester, rallying support for the 15-year-old St Elizabeth girl allegedly abused by Rupert Clarke, the pastor of the congregation. One of the protestors strikes a pastor with a tambourine.

Women who were allegedly abused by Moravian ministers while in their teens begin to speak out. Social commentator and gender specialist Nadeen Spence, who grew up in the Moravian Church, is among the people seeking to help the victims.

The Tambourine Army puts out a call for volunteers, advising interested persons to email tambourinearmy@gmail.com for details. 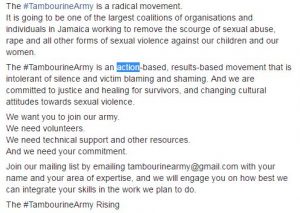 A call is made for Jamaicans to wear black in protest of violence against women and children. The #TambourineArmy gains traction as more allegations of sexual abuse are brought against members of clergy, and after the invitation is given for volunteers to join the army and become part of the movement.

A Teach-In is held at the Mary Seacole Hall with Dr Verene Shepherd of the Institute of Gender and Development studies (IGDS) at UWI, Mona, on the ‘History of and Culture of Rape in the Caribbean’.

A Teach-In is held at the Mary Seacole Hall on the Sexual Offences Act. This is done in partnership with UN Women and the I’m Glad I’m a Girl Foundation. The main presenter is Tracy Robinson, a gender and law specialist.

The #TambourineArmy hosts a national Survivor Empowerment March in solidarity with the #LifeInLeggings movement. Marches are held simultaneously across several countries in the Caribbean to “rally support and action to uproot the scourge of sexual abuse and violence against our women and girls”, and to present the Tambourine Army 20-Point Action Plan for Change.

Latoya Nugent, co-founder of the Tambourine Army, is listed by the police as a person of interest.

Nugent is arrested and charged with malicious use of computers following several complaints from individuals about her behaviour online.

Nugent’s case is not called up in court because she has been hospitalised. After being released from hospital, she is granted bail.

Please note that this post will be updated as the story continues to unfold.