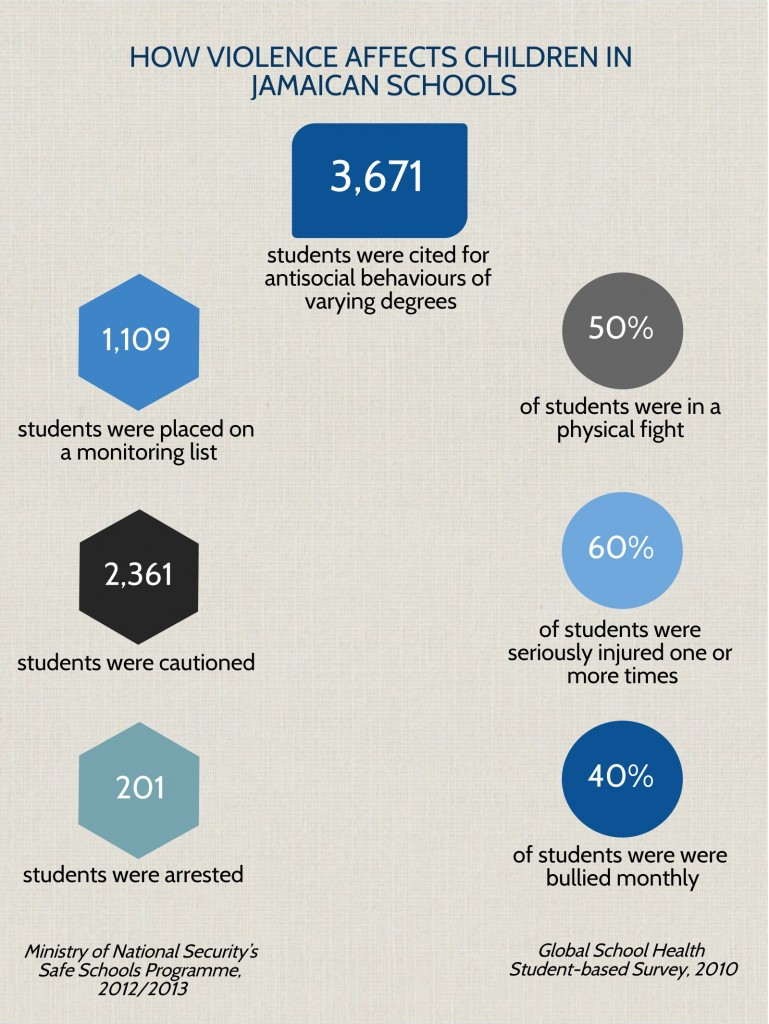 Data from the Ministry of National Security’s Safe School Programme indicated that during the 2012/2013 academic year, 3,671 students were cited for antisocial behaviours of varying degrees. 1,109 students were placed on a monitoring list, 2,361 cautioned and 201 students were arrested. This data indicates that those students who were placed on a monitoring list are in need of a more structured intervention which could range from minimal to moderate, while those students committing crimes require more intense intervention aimed at rehabilitation.

Despite these issues, which continue to plague the society and negatively impact the teaching and learning environment, Jamaican youth are expected to achieve high academic success. An unrealistic expectation at best, as these issues do not only impede student performance and effective curriculum delivery, but also compromise the safety and security of the school environment.

Schools are therefore challenged to meet the social and emotional needs of students. Children cannot learn effectively if they are struggling with a mental health problem, such as depression, or feel overwhelmed by academic, social or family pressures. A common response to students with emotional and social challenges has been repeated suspensions and expulsions. Some schools have established education centres in an attempt to address these challenges. However, successful response to our students require system-wide cooperation that provides leadership, direction and support to the five major context of adolescence (families, peer groups, school, work and leisure).

In recognition of the fact that all students are at-risk of developing psychosocial issues due to the myriad of social challenges affecting children and youth, there has been a shift in policy direction by the Ministry of Education, to emphasize a comprehensive response to the psychosocial needs of all students. This shift is articulated in Policy Priority #4 and Strategic Objective #7 of the National Education Strategic Plan (NESP).

In line with this movement to ensure students have the best opportunities to learn and develop into positive citizens, in 2014 the Ministry of Education began implementing the School-wide Positive Behaviour Intervention and Support (SWPBIS) framework in a three-year pilot project in 56 primary and secondary level schools nationwide.

First developed in the US in the 1980s, the SWPBIS framework has achieved success internationally with its team-based, whole-school approach.  It uses a tiered system approach to establishing or changing a school’s social culture relying on “implementation with fidelity, a continuum of evidence-based interventions, content expertise & fluency by all school staff, team-based implementation, continuous progress monitoring, universal screening, and data-based decision making and problem solving” (pbis.org).

In the first tier, new discipline cases are reduced; in the second tier, remaining cases that have not been resolved by the improved school culture are addressed with focused responses; in the third tier, individualized attention is given to the few behaviour cases that have not yet responded to other efforts.

In 2015, the Jamaican Ministry of Education moved its first 20 pilot schools to complete SWPBIS tier 1 training. These schools are scheduled to commence tier 2 training. Subsequently, the training was extended into an additional 36 schools that completed the first Tier 1 training session.

While the original 20 pilot schools move on to Tier 2 and tier 3, the Ministry of Education’s Guidance and Counselling Unit has also procured screening tools for the identification and referral of students for psychosocial support services.