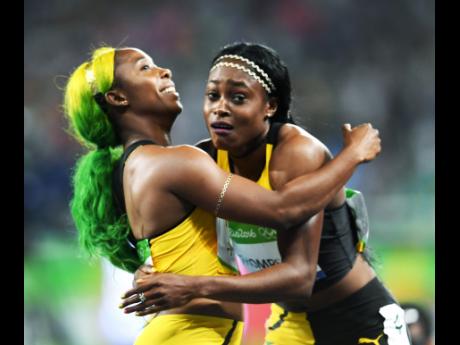 Earlier this month, I noted that defending champion Shelly-Ann Fraser-Pryce would face an uphill battle in her quest to claim a third 100m title and a place in history as the first woman to ‘three-peat’ in any event at the Olympics. I also noted that her main challenge would come right from her own ‘home,’ as training partner and compatriot Elaine Thompson was right there breathing down her neck. Fraser-Pryce had experience on her side, but that lingering toe injury and short-circuited season left her hobbled. She ran a blazing 10.88 seconds in the semi-finals, but was wincing and limping off the track. Thompson, on the other hand, dealt with a hamstring injury following the national trials, but appeared easy as Sunday morning through the rounds, never once having to exert herself. She also ran 10.88, but at a stroll.

In the end, it was Thompson who prevailed, leading from gun to tape in her typical easy manner, copping gold in 10.71 seconds. As she blazed her way down the track – still not maxed out – it occurred to me that we weren’t just watching Thompson become only the second Jamaican woman to win Olympic 100m gold, but we were witnessing a changing of the guard.

Although many Jamaicans are still shocked at the result, it shouldn’t really come as a surprise. Thompson’s 2016 performances prior to the Olympics were superb, as she steadily racked up wins in the Diamond League. But I think the writing has been on the wall since last year. She announced her arrival on the scene at the 2015 Intercollegiate Track and Field Championships, clocking a record 11.09 seconds running into a negative head wind of -1.1. Eleven days later, she returned and won the UTech Classic in a world-leading 10.92 seconds. She followed that up with victory over world class sprinters Blessing Okagbare (Nigeria), Allyson Felix (USA) and compatriot Kerron Stewart at the Jamaica International Invitational, clocking 10.97 seconds.

Track fans were salivating at the prospect of watching the rising star compete against the reigning queen Fraser-Pryce at the national trials to select the team for the World Championships in Beijing, China. However, the ladies’ coach, MVP’s Stephen Francis, decided Thompson was not ready for the 100m-200m double and pulled her from the shorter event. Many were baffled, and some wondered if the coach was keeping the ladies apart to allow Fraser-Pryce a clearer path to defending her crown. We’ll never know what might have happened in 2015 had the two clashed, but it’s clear that Thompson had slowly been closing in on her mentor. This became evident in July when she clocked 10.70 seconds to take the title at the 2016 national trials, equalling Fraser-Pryce’s national record in the process.

Of course, some will disagree that the winds of change have blown due to the fact that Fraser-Pryce is injured. Certainly, we would have loved to see a fully fit Fraser-Pryce versus an equally well-prepared Thompson. But I think the only thing that would have been different here is the colour of the former’s runner-up medal. The second place finisher, USA’s Tori Bowie, was not injured, was giving it her all, and still there was a .12-second difference between them. Thompson doesn’t have her role model’s signature rocket-like start, but she does have brilliant top end speed – which she didn’t even need to deploy in that 100m final. The last few metres of her races could also still use some finessing, so when she fixes her start and her finish, she will be a machine. It could also be argued that both women ran the same time to qualify for the finals. But I urge everyone to look at both races again. Thompson was not ‘pressing gas’ then, either.

In my opinion, the end result shows that the transition is now complete. We saw it happen before in 2008, when Fraser-Pryce dethroned the venerable Veronica Campbell-Brown, her sudden rise also displacing Stewart as the heir apparent. This is not about ‘dissing’ the former champion, or trying to hustle her into retirement. Thompson’s succession doesn’t mean Fraser-Pryce is done. She is not going to slink off somewhere and never win again. Oh no. These two ladies will duke it out for a few more seasons, but Thompson will be billed as the to one to beat going forward. Again, we have yet to see her run flat out, leaving everything on the track, so it’s only a matter of time before she lowers the national record to the 10.6 range. Coincidentally, I also think Fraser-Pryce has 10.6 potential. Call me overly optimistic (my medal count prediction betrays this), but I believe Thompson even has the potential to get down to the 10.5 range. And wouldn’t it be an absolute joy if she could somehow challenge either of Flo-Jo’s world records?

The transition will also be complete in the upcoming 200m. Campbell-Brown has dominated this event since she took her place at the top in 2004, even though she has not been in the best shape lately. The national champion is Simone Facey, who finally delivered on years of promise to beat Campbell-Brown for the title in July. However, Thompson is the true successor and her outstanding 2015 proved it. Just how good is she over 200m? Let’s take a look: She smashed the great Merlene Ottey’s Sainsbury Anniversary Games record of 22.24 seconds, shaving it down to 22.10 seconds. Ottey’s record had stood for 24 years, making it 11 months older than Thompson herself at the time. Her personal best is 21.66 seconds, making her the fastest Jamaican woman since Ottey. Although she had to settle for silver behind the flying Dutchwoman Dafne Schippers in Beijing, that 21.66 was the second fastest time in the world for the past 17 years. She became the fifth fastest woman ever over the distance – faster than multiple 200m gold medallist Felix (21.69 seconds PB). In fact, she was just two-hundredths of a second off Ottey’s national record of 21.64 seconds.

In Rio, the fight for gold will be again be between Thompson and Schippers, who has not lost a bit of form. In fact, she had Thompson and Facey soundly beaten at the Oslo Diamond League event, where she ran a meet record 21.93 seconds to eclipse the 21.94 set by Gwen Torrance all the way back in 1994. Should Elaine once again ‘upset’ the apple cart, this race could go down as one of the greatest in women’s sprint history.

Although I’m a bit sad that Fraser-Pryce didn’t get to pull off the historic three-peat, I am comforted by the fact that the gold medal and Olympic title remain in Jamaican hands. Thompson is a worthy successor, and will take our women’s sprinting into unforeseen realms in the future. This transition means our sprint factory is in good shape, especially on the women’s side. It was also heartening to see former Edwin Allen star Christania Williams make the finals. Had she not felt a cramp at the start, she might have finished better. However, her presence there also bode well for our future.

If we are to maintain a stranglehold on sprinting in the Olympics and World Championships for the foreseeable future, we need this kind of changing of the guard. It doesn’t do to have one athlete dominating while there is no one in line to pass the baton to upon their retirement. In fact, we should be hoping for a similarly smooth transition on the men’s side – but that can take place after Bolt claims his triple-triple later this week.