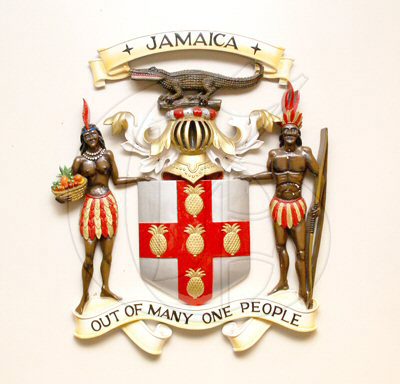 The Jamaican national motto is ‘Out of Many, One People’, based on the population’s multi-racial roots. The motto is represented on the Coat of Arms, showing a male and female member of the Taino tribe standing on either side of a shield which bears a red cross with five golden pineapples. The crest shows a Jamaican crocodile mounted on the Royal Helmet of the British Monarchy and mantling.

The nation’s motto was announced on April 3, 1962, on the authority of the premier, Norman Washington Manley, and Cabinet leader of the Opposition, Sir Alexander Bustamante. The announcement was made by chairman of the Independence Celebrations Committee, Theodore Sealy. ‘Out of Many, One People’ replaced the Latin motto ‘Indus Uterque Serviet Uni’ (The Indians twain shall serve one Lord), which was discarded as bearing no relation to modern, independent Jamaica. The motto is inscribed in the scroll of the Jamaica Coat of Arms, which was retained without any other alternation.

As was explained in a Ministry Paper tabled recently in the House of Representatives, the existing Coat of Arms was granted Jamaica in 1661, under Royal Warrant and was partially revised in 1957. It constituted a badge of great historical significance. The original Arms were designed by William Sandcroft, who was, at that time, Archbishop of Canterbury, and the use of the Royal Helmet and Mantling is a unique distinction accorded Jamaica.

The Coat of Arms was deemed most suitable for souvenirs and other commemorative devices, according to the chairman’s statement.