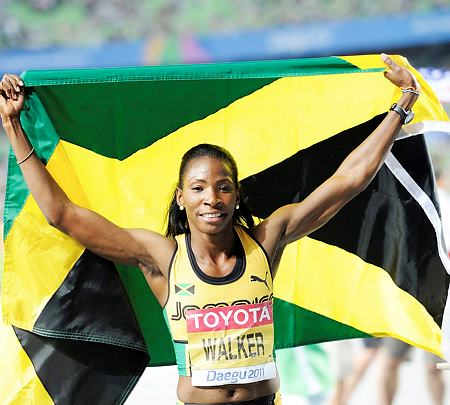 Melaine Walker had one of the most successful Champs careers in the history of the competition, and went on to accomplish great things as a senior athlete. She has 14 gold medals at every class (4 to 1) and etched her name in the record books on several occasions. She helped her St Jago High School team to its first Champs title in 1996, winning the 70m hurdles and supplying a stellar third leg in the 4x100m relay. She established her dominance in class 3 and became a force on the St Jago team. Later on, in her first year in class 2 (1999), she beat Veronica Campbell in the 100m and 200m finals, and also claimed the 100m hurdles title. What made her victories even more stunning was that fact that she had broken a collarbone doing the high jump at a school sports day, so her arm was in a cast and sling.

Walker was forced to switch to the 400m hurdles due to persistent injuries, and although she wasn’t fond of the event, it is what brought her international glory. After demolishing the Champs record in 2001, taking down to 56.55 seconds, she beat 1996 Olympic gold medallist Deon Hemmings that same season and made the World Championships team to Edmonton, Canada. She won a silver medal at the World Junior Championships here in Kingston, Jamaica the next year. That only fueled her hunger for the gold medal. Following her collegiate career in the US, she returned to Jamaica and trained at the MVP Track Club, under the guidance of Stephen Francis. It would pay off, as Walker struck gold in Beijing, China, setting a new Olympic record of 52.64 seconds. The very next year, in Berlin, Germany, she added World Champion to her resume as she claimed the gold in 52.42 seconds, the second fastest time in history behind Yulia Pechonkina’s 42.34 seconds. She took the silver at the 2011 edition in Daegu, South Korea and had a meltdown at the 2012 London Olympics, admitting that she lost her fire.

She left the MVP camp in 2013, moving to the rival Racers Track Club, where she announced plans to focus on her pet event, the 100m hurdles. She has a personal best of 12.75 seconds, set at the 2006 NCAA Championships in Sacramento, California. There was one bright spark in an otherwise bleak 2013, as she was inducted into the University of Texas Women’s Athletics Hall of Honour. Walker is an eight-time US Track & Field and Cross Country Coaches Association All-American and six-time Big 12 champion. She is also one of the top hurdlers in Texas track and field history.