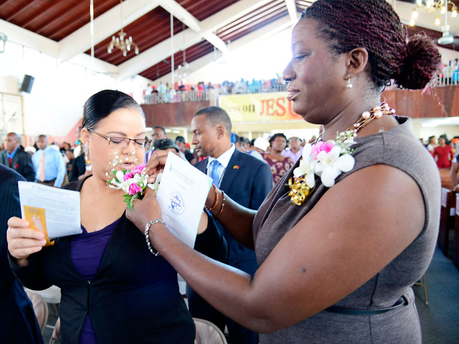 November 24-29 is being marked as National Journalism Week, under the theme ‘Persevering in the face of adversity.’ The commemoration of National Journalism Week this year comes at a time when members of the press are at odds with the Office of the Prime Minister (OPM), over Prime Minister Portia Simpson Miller’s seeming reluctance to engage with its members in interviews on issues of national concern. This follows two recent incidents in which she refused to answer questions regarding her handling of the situation with State Minister Richard Azan, who admitted to illegally authorising the construction of a number of shops on Clarendon Parish Council lands at the Spaldings Market.

The second of these incidents saw a journalist being pushed out of the way by members of her security team after he questioned her about Azan’s recent reinstatement, after he was cleared by the Director of Public Prosecutions (DPP). Naturally, there has been an outcry from the PAJ and the Media Association of Jamaica (MAJ), the latter calling for “urgent and constructive dialogue” on how journalists engage the Prime Minister. Following the first incident, in which Information Minister Sandrea Falconer said Simpson Miller was hit in the face after journalists pushed microphones at her, the OPM established a set of guidelines for the proper management of on-location interviews with the Prime Minister, one of which calls for advanced notice of requests for such interviews and the clearance of interviews with the Prime Minister’s on-site personnel. These guidelines have been rejected by the PAJ, cited as being too restrictive.

These incidents are indeed unfortunate, coming on the heels of Jamaica being declared tops in the Western Hemisphere in terms of press freedom earlier this year. It is too soon to say whether this will impact our rankings, but it is certainly an issue that needs to be nipped in the bud. The Prime Minister, as leader of the country, is a public official and she and her government must be held accountable to the people who elected her to the office. One way of doing so is fielding questions from journalists, who are tasked with informing the public, on subjects of national importance and to clarify or give her position on controversial issues. Therefore, it cannot always be the case that her team will receive advance notice. This goes for other public officials as well.

Members of the press have asserted that the Prime Minister has not been accessible for more than a year, having not granted a major, in-depth local interview or press conference in that time. This amidst statements from at least one media house that it has repeatedly tried to have Simpson Miller appear as a guest on one of its current affairs programmes, without success. This situation is not acceptable in a democratic society like Jamaica.

The statement from the OPM following this latest incident closes by affirming the government’s full “support for press freedom and the right of journalists to ask questions of the Prime Minister but must insist this be done in a manner respectful of the office and in keeping with the stated guidelines.” We agree that the Prime Minister and other public officials must be approached with respect. However, they must in turn respect the Jamaican people’s right to be informed and to hear from our leaders. Both the OPM and the PAJ must work swiftly towards resolving the issue.