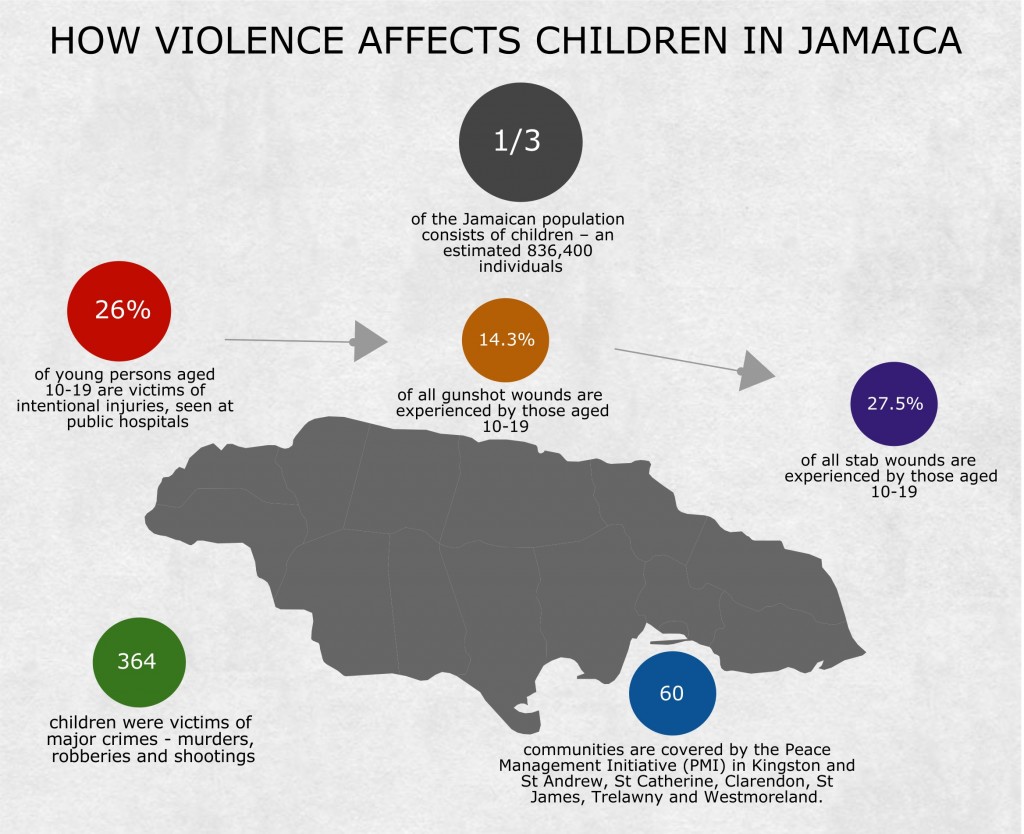 Nearly one third (31 per cent) of the Jamaican population consists of children – an estimated 836,400 individuals.  Scores of children have been both victims and perpetrators of violence. High levels of crime and violence in homes, institutions and communities put children at risk of injury or death, and affects their emotional well-being and mental health, their inter-personal relationships in the family and wider community and their performance in school. How children are socialized and the prevalence of armed violence in the community impacts the decision of children to become perpetrators of armed violence themselves.

Young persons aged 10-19 years account for nearly 26 per cent of the victims of intentional injuries seen at public hospitals. Children in this age cohort experienced 14.3 per cent of all gunshot wounds and 27.5 per cent of stab wounds. Males experienced more than twice the number of stab wounds than females did and five times as many gunshots.

The police report on Category 1 crimes by parish for 2013 shows juvenile males are at increased risk of participating in murders, shootings and robberies, as well as other violent crimes. In 2013, 364 children were victims of major crimes (murder, robbery and shooting) and many lost caregivers – leaving them even more exposed to poverty, exploitation and further violence.

Targeting the most at-risk youth, the PMI’s core functions include violence interrupting, mediation, counselling and life skills training for youth. The PMI’s planning processes are informed by data from the Jamaica Constabulary Force and anecdotal information received directly from communities.

One of the two existing PMIs, the Kingston Peace Management Initiative, is a non-governmental group, governed by its own board of directors, which ensures the coordination of activities within targeted parishes. The St James PMI is a government-operated entity but has a structure and functions which are very similar to the Kingston-based organization.

These two PMIs operate in six of the fourteen parishes of the island. The Kington-based PMI operates in the Kingston and St Andrew Metropolitan Area, St Catherine and Clarendon. The St James-based PMI operates in St James, Trelawny and Westmoreland. Both PMIs cover more than 60 communities within these parishes, with the Kingston PMI alone covering more than 50 communities.

The PMIs have a strong, active volunteer core drawn from the communities in which the organizations work. They partner with academic organizations, international and local NGOs such as the Dispute Resolution Foundation, faith-based entities such as the Tower Hill Missionary Church, and various UN agencies.

The PMIs are financed mainly by the Government of Jamaica (GOJ).  They have a very close working relationship with the Ministry of National Security (MNS), to which they are accountable and report on a monthly basis. The Ministry intends to facilitate the establishment of additional PMIs in areas not currently served by the two existing organizations.

The GOJ, through the MNS, intends to implement a comprehensive national programme of violence prevention to complement traditional law enforcement actions. Guided by the National Crime Prevention and Community Safety Strategy/Unite for Change Initiative, the Ministry will develop a more substantive and defined violence interruption strategy within its overall crime management strategy based on the approach of the USA-based programme, Cure Violence.

The Ministry is partnering with the USA-based programme, Cure Violence, to develop a violence interruption framework to reduce the incidence of shootings and homicides in targeted communities. The MNS will achieve this by working through the Peace Management Initiatives that operate in Kingston and St. James to build on the violence interruption work that the PMIs have been implementing since 2004.