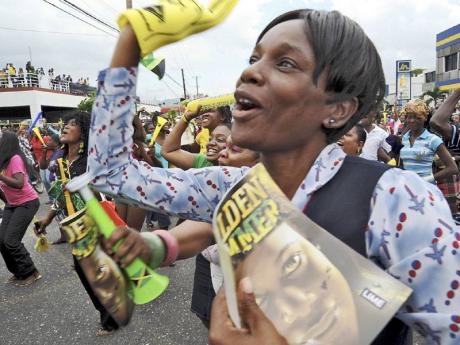 Rio 2016 promises to be an Olympics like no other for Team Jamaica. Both Usain Bolt and Shelly-Ann Fraser-Pryce are going for historic three-peats. New kid on the block Elaine Thompson is in dangerous shape and looking to write her name on the champions list. Bolt’s heir apparent Yohan Blake is back in action and raring to go. Our ‘water baby’ Alia Atkinson will be hunting that elusive Olympic medal. Also in the aquatics centre is our first male diver, Yona Knight-Wisdom, looking to create history. Speaking of history, Toni-Ann Williams has already broken the mould as Jamaica’s first ever Olympic gymnast, and she’s not just going to Rio to take in the sights.

With such a diverse team, there will be many occasions for us to draw a little closer to our televisions and cheer our hearts out. Here are the seven things you absolutely need in order to enjoy the Games in typical Jamaican style.

A television or screen of some sort – Listening to the play-by-play on the radio is ok, but you want to be able to see every event live and in living colour. Watch them live on TV or on a computer or smartphone screen as livestreaming allows, and then watch them again on Youtube. You’ll need to remember all the details to rehash with your family and friends later, especially those overseas who are fed up with the ‘biased’ American coverage.

A ride to Half Way Tree – Whether you are from the city or you have to take a bus from the other end of the island to get there, you want to be in Half Way Tree to watch the big races on the giant screen at the intersection of South Odeon Avenue and Constant Spring Road. You especially want to be there for a Bolt race, and certainly for the 4×100 relay finals. The atmosphere is electric, as hundreds of people stop what they are doing, motorists ignore green lights (not that they can move anyway, as people have clogged the streets), and the crowd becomes one giant cheerleading squad. If you can’t make it to Half Way Tree but will be Downtown, there’s a similar screen on North Parade. The atmosphere will be the same, or even more colourful.

A rowdy group of friends, coworkers or even strangers – You do not want to be alone when Team Jamaica is mashing up the place. Find yourself in Half Way Tree, Downtown, a bar, a fast food restaurant, your office’s conference room (your boss will absolutely be cheering like a lunatic as well, so no worries), the living room with your family members or housemates – anywhere there’s a crowd. You will need someone to hug, high-five and make noise with, followed by the inevitable loud post-event analysis, because every Jamaican – Every. Single. One –  is a sports expert.

Dutch pot covers – You may lose your voice at some point during the Olympics with all the cheering, so you need backup. Thundersticks and vuvuzelas are the noisemakers du jour, but every Jamaican knows the value of two old school Dutchie covers at a time like this. Depending on where you live, you may disturb your neighbours, but it’s the Olympics, so they will forgive you. And if you only have one Dutchie cover (really? What kind of Jamaican are you?), use the big metal serving spoon to knock it for a similar effect.

A flag and/or your colours – You will need something to wave as you cheer, and there will be hundreds of entrepreneurial Jamaicans roaming the streets selling miniature flags that are not quite there in terms of the national colours, but it’s the thought that counts. Support them and buy a flag or two to wave as the excitement peaks. It is also perfectly acceptable to wear black, green and gold everywhere during this time. You can make it work for both office garb and casual attire.

Something (hard) to drink – If your nerves are bad, you might need a little tups of ‘the whites’ to mellow you out before the big finals. And you will certainly need something to make a toast after our athletes claim another medal. (Or to drown your sorrows in if someone doesn’t do as well as we thought they would. But we will not entertain such thoughts.)

So, there you have it. Get your paraphernalia, gather your crew and let the pandemonium begin!