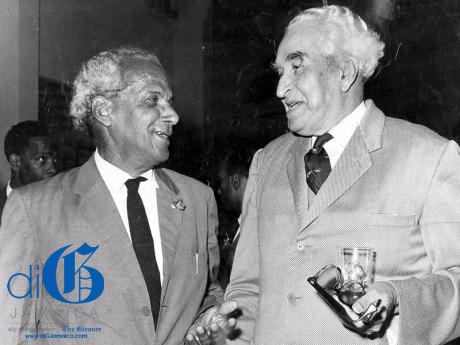 Jamaicans are gearing up to head to the polls for the island’s 17th general parliamentary election on February 25. Each week, we will be taking a look back at the previous elections that have helped shape the Jamaica we know today. Here is part one of our ‘recap’:

December 12, 1944 – This date marked Jamaica’s first general parliamentary elections. At this time, the country had been granted full adult suffrage for the election of members to the House of Representatives. The Jamaica Labour Party, led by the Honourable Alexander Bustamante, won 22 seats, while the People’s National Party, led by his cousin the Honourable Norman Manley, won five. Another five Independent candidates also won seats. Just over half of the electorate (55.15 per cent) voted. It’s of historic importance to note that Bustamante won his seat in Kingston but Manley lost his in St Andrew.

The second arm of the Bi-cameral Legislature was the Legislative Council, which had three official and 13 unofficial members appointed by the Governor. The House of Representatives elected five of its members to the Executive Council, which advised the Governor on national policy and prepared the national budget. Other Council members were the Colonial Secretary, the Attorney General, the Financial Secretary, and two unofficial members appointed by the Governor from among the members of the Legislative Council. The Governor presided over meetings and had a casting vote. The five members elected by the House of Representatives were given administrative responsibility for finance; communications; agriculture, land and commerce; education and social welfare.

December 20, 1949 – The JLP won its second general election with 42.7 per cent of the vote, even though the PNP’s 43.5 per cent accounted for a larger number of voters. The voter turnout was much higher this time around, as 63.80 per cent of the electorate cast their ballots. The important thing to note here is under this system of “first past the post,” the PNP, which had a larger majority of the votes, won only 13 seats while the JLP won 17 seats. Independent candidates, along with two then emerging parties – the Agricultural Industrial Party (AIP) and the United Party of Jamaica (UPJ) had candidates contesting, but won no seats.

In 1953, the Ministerial System of Government was formally introduced as part of the Executive Arm of Government and the Bustamante became the first Chief Minister by the approval of the House of Representative, and as such, was responsible to nominate seven other ministers to be appointed by the Governor who served as part of the Executive Council.

January 12, 1955 – The third general parliamentary elections ushered the PNP into power for the first time, with a poll of 50.5 per cent of the vote and a total of 18 seats, compared to the JLP’s 39.1 per cent of the vote and 14 seats. There was an infinitesimal increase in the percentage of the electorate that voted – 63.93. Eleven independents also ran, along with four minor parties – the National Labour Party (NLP), the Republican Party (RP), the Farmer’s Party (FP) and the People’s Freedom Movement (PFM).

July 28, 1959 – The fourth general election was strictly between the two main parties – JLP and PNP. The election had 45 established constituencies. Of the 45, seats the PNP took 29 with 64.4 per cent of the votes and the JLP the remaining 16 seats, with 35.6 per cent of the votes. The voter turnout also increased, going up to 65.35 per cent.

Jamaica, having gained internal self government abolished the Council of Ministers and this was replaced by the Cabinet, headed by the Premier (Manley) and 11 other ministers chosen by the Premier and appointed by the Governor. The position of Parliamentary Secretary was also introduced. The Legislative Council was restructured to comprise two or three persons appointed by the Governor on the advice of the Premier, and 18 other persons appointed at the discretion of the Governor to represent differing political views in the House of Representatives. During this time, the JLP began agitation for Jamaica to withdraw from the West Indies Federation, which Manley had taken Jamaica into along with nine other British Caribbean islands. The Federation had been established in 1958 by the British Caribbean Federation Act of 1956 with the aim of establishing a political union among its members. In the federal election of 1958, the JLP won 12 of the 17 seats allotted to Jamaica, while the PNP won five.