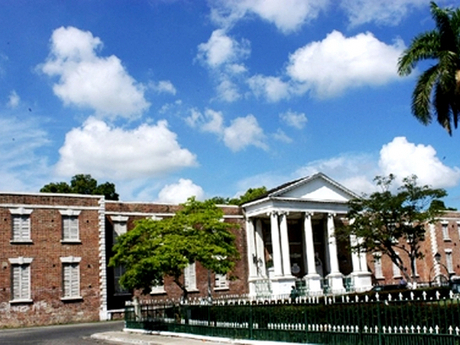 The history of Spanish Town dates back to 1534 when it was settled by the Spanish and established as the nation’s capital city. The original name was Villa de la Vega (city on the plains). Captured by the British in 1655, it was renamed St Jago de La Vega and continued to serve as Jamaica’s capital for another 217 years. Today, the town remains one of the oldest continuously occupied places in the Western hemisphere.

The Spanish Town of today is but a shadow of its former splendour, but there are still several places of interest for those of us who love a bit of history. Let’s explore some of Spanish Town’s historical treasures!

The former town centre, now known as Emancipation Square, consisted of four important buildings. The square was severely damaged by fire as well as the 1692 earthquake, but parts of the buildings have since been restored and put to use.

The Spanish Town Cathedral also known as St Catherine Parish Church or the Cathedral Church of St James, was built on the site of the Roman Catholic Chapel of the Red Cross, which was destroyed when the British seized Jamaica in 1655. The church became the first Anglican cathedral outside of England in 1843 and is the oldest one in the English-speaking Caribbean. Today, the Cathedral is the seat of the Bishop of the Diocese of Jamaica.

The white Cenotaph that stands directly opposite the Cathedral was erected in honour of the Jamaican soldiers who fought in World Wars I and II.

The historic cast iron bridge spans the Rio Cobre river at the eastern end of Spanish Town. The bridge, which is the oldest of its kind in the western hemisphere, was designed by British engineer Thomas Wilson, cast in 1801 and shipped to Jamaica in prefabricated parts which were assembled and mounted on stone abutments. At one point, it was placed on the UNESCO list of endangered world sites, but it is currently being restored. The bridge has been declared a National Monument by the Jamaica National Heritage Trust.

Have you visited any of these or other historical sites in Spanish Town? Share with us in the comments or or on our Facebook or Twitter pages.