Saturday, September 20th, marked the 26th anniversary of International Coastal Cleanup Day. Each year, hundreds of thousands of volunteers around the world come together to clean up beaches, lakes and rivers to clean up unsightly and dangerous litter in their countries.

According to the Jamaica Environment Trust (JET), Jamaica has officially participated in ICC efforts since the mid-90s, with small cleanups taking place in a few locations across the island. JET has been the national coordinators of ICC activities in Jamaica since 2008. The organisation works with local site coordinators such as community based organisations, non-government organisations, government agencies, private sector organisations, hotels, tourism stakeholders, youth clubs, service clubs, and schools to carry out cleanup activities across Jamaica. This is just one part of the process, however. ICC volunteers are also responsible for collecting data on the different types of garbage and how they affect the marine environment.  The data is compiled and sent by JET to the advocacy group Ocean Conservancy in the US, who coordinates the global event.

According to Ocean Conservancy statistics, Jamaica’s 6,437 volunteers collected a whopping 64,111 pounds of trash – 421,399 items in total last year. Below are the top 10 items collected locally during the 2013 cleanup. 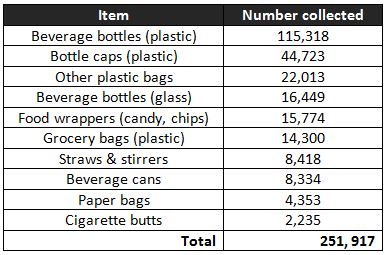 Click the link to read the full 2014 report, Turning the Tide on Trash.

Among the locations tackled in Jamaica on Saturday were Shipwreck Beach and Rocky Beach in Kingston, Bulls Bay Beach in Hanover and Paggee Beach in Port Maria, St Mary. Below are some scenes from the 2014 ICC activities.