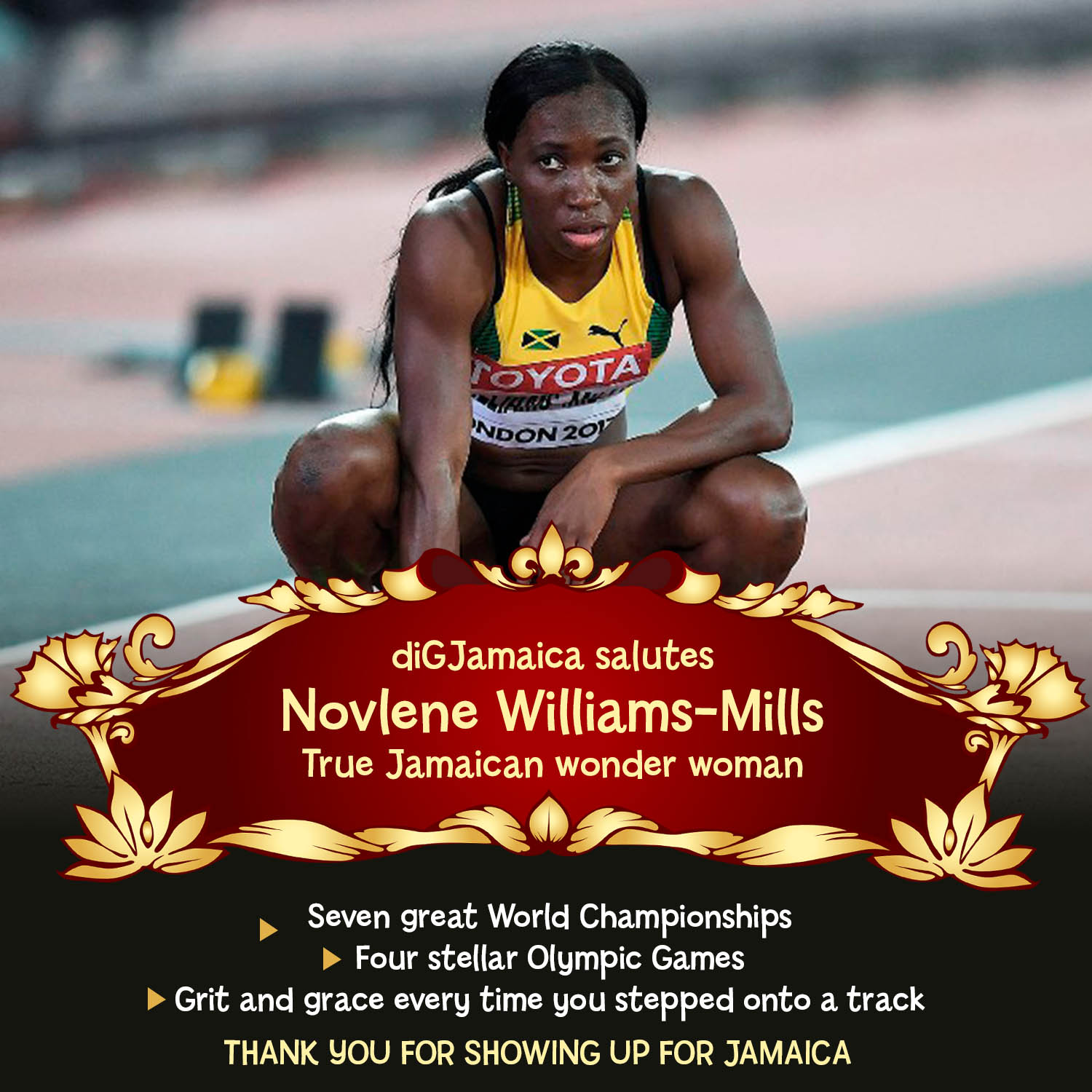 Most of the attention in the athletics world has been devoted to the retirement of Usain Bolt at the end of the recent World Championships in London. It was to be expected, considering the stature of the man. What most people—even most Jamaicans—did not realise, though, was that it was also the last hurrah for our 400m warrior woman, Novlene Williams-Mills.

In February, the veteran quarter miler announced that this would be her final season on the track. Whether or not they knew of her decision, Jamaicans were all looking forward to watching her anchor our women’s 4x400m relay team in the finals, but just like Bolt, she was forced to leave the track empty-handed as her teammate Anneisha McLaughlin-Whilby suffered an injury on the second leg. But at least Bolt had an individual bronze medal with which to console himself. So even though it was hurtful to watch his career end the way it did, I was perhaps even more crushed to see how things ended for Novlene. This is compounded by the fact that she probably had one final moment on the podium denied her because of an altercation between two of her teammates earlier in the day.

Novlene Hilaire Williams-Mills has been a feature on the national team since the 2004 Athens Olympics, where she reached the semi-finals in the individual 400m and was a member of the bronze medal 4x400m relay squad. She won her first individual medal at the 2006 Commonwealth Games in Melbourne, Australia, copping bronze. Her other individual medals came at the 2007 World Championships in Osaka, Japan (bronze) and the 2014 Commonwealth Games in Glasgow, Scotland (silver). She has been an integral part of 12 medal-winning 4x400m relay teams over the course of her career, finally tasting gold at the 2015 World Champs in Beijing, China when she outsmarted Francina McCorory on the anchor leg to pull off a convincing victory for Jamaica.

Aside from of her outstanding efforts for team and country, Novlene is best known for being a breast cancer survivor. Diagnosed just one month before the start of the London 2012 Olympics, she still showed up and gave her best effort, winning a bronze medal with the relay team. No one outside of her circle had even the slightest clue about her private battle, and the nation was shocked when she finally revealed all that she had gone through a year later: four surgeries, including reconstruction, and all the physical, mental and emotional upheaval involved in the process of healing.

Earlier this year, she revealed in ESPN The Magazine’s Body Issue:

“It was hard being in London at the Games when the rest of the world didn’t know. The moment I have to step on the track, I know everybody is going for that medal. Me? I’m counting the exact days until my surgery. It was like a weight on my shoulder that I couldn’t get off, no matter how hard I tried to put it in the back of my mind for these couple of races. It was just something that kept weighing me down every time I stepped on that line to compete.”

But breast cancer couldn’t slow her down. In fact, she faced it down and came out of the fight stronger in the end.

I can imagine it’s been difficult for her to have this aspect of her life completely overshadow everything she has worked for on the track, but I think overcoming cancer—and in the manner that she did—only showed more of her true mettle. Ahead of her final individual race, where she would finish eighth, she asked that we remember her as “a strong competitor and as someone who always gave her all, regardless of the challenges in front of her.”

Novlene, we will definitely remember you for all the times you showed up for Jamaica. We will remember you for being a warrior and a survivor. And we will never forget that anchor leg—you know the one—as you patiently tracked McCorory, biding your time until you could pounce. That spine-tingling moment when you went wide on the track, closed her down and zoomed past will give us goosebumps for years to come.

We thank you for the seven great World Championships, the four stellar Olympic Games, and every other time that you have stepped onto a track. Whether or not you were wearing the black, green and gold kit, you were representing us, and you did so with humility, grace and true grit. You deserved one last podium finish to cap off a marvelous career, but what’s done cannot be undone. We wish you well as you move into this new phase of your journey. Godspeed!