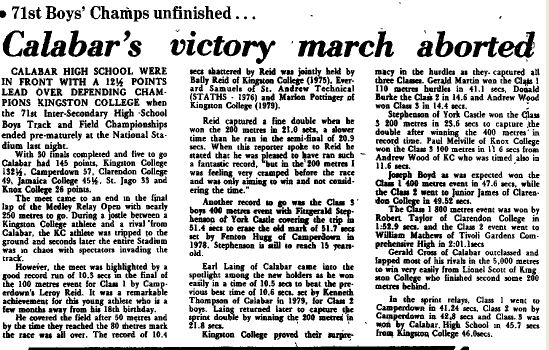 Friendly rivalry in sports can easily grow into a heated dispute. That is exactly what happened in 1981 at the 71st staging of Boys’ Champs at the National Stadium. The day started calmly enough. The usual top two – Calabar and Kingston College (KC) – were at the top in point standings. Calabar had 145. KC was on 132 1/2. The final events were slated to be especially intense because of how close the points standings were.

But unruliness stepped in. It was the medley relay. With not even a lap to go, there was some stumbling and jostling between runners from KC and Calabar. When the KC runner fell, enraged supporters rushed on to the track to protest from as close to the offense as possible. Calabar supporters responded, and a war of more than words was on. Supporters from both schools were ferocious in their bid to defend both title and honour. Brains flew off the track, and brawn took over. In the heat of the moment, they forfeited the exciting end that everyone had been anticipating, eclipsing it with an excitement of another, uglier kind.

ISSA’s Disciplinary Committee said they would investigate the matter. The outcome? Calabar and Kingston College were banned from Champs 1982, losing the chance to show off the prowess in the upcoming year, but also using the year off to stoke the seething embers of a rivlalry that keeps growing with each Champs year.