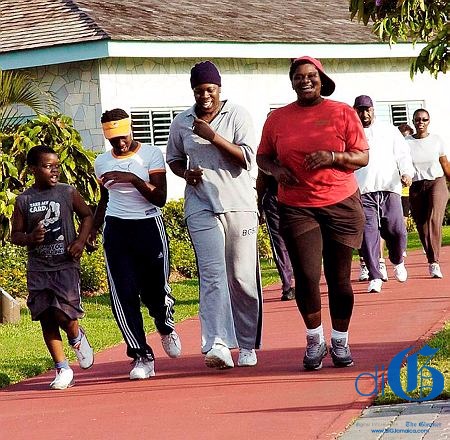 Yesterday marked the beginning of National Physical Activity Week, which emphasises the importance of regular physical activity as a way of preventing non-communicable diseases (NCDs) such as heart disease and diabetes.  This initiative was started by the National Health Fund in 2009.

Many people think of exercise whenever they hear the term ‘physical activity,’ but they are actually not the same thing. Physical activity is bodily movement produced by skeletal muscles. It requires energy expenditure and produces progressive health benefits. Some examples of physical activity include walking to and from work or school, taking the stairs instead of elevators, gardening, doing household chores, dancing, and washing the car by hand.

Exercise is a type of activity that requires “planned, structured, and repetitive bodily movement to improve or maintain one or more components of physical fitness.” Examples of exercise are walking, running, cycling, aerobics, swimming, and strength training.

Physical inactivity, which describes a level of inactivity that is lower than required to maintain good health, is dangerous. In fact, it is a serious public-health concern. A number of individuals do not achieve the recommended amount of physical activity, let alone exercise, and some of us are not physically active at all. Furthermore, the number of people not physically active is at risk of suffering from health and lifestyle-related issues.

According to the National Strategic and Action Plan for the Prevention and Control of Non-Communicable Diseases in Jamaica 2013-2018,

an estimated 63 per cent of deaths globally are due to NCDs, mainly because of cardiovascular diseases (48 per cent), cancers (21 per cent), chronic respiratory diseases (12 per cent) and diabetes (3.5 per cent). These diseases are bound by four common behavioural risk factors: unhealthy diet, physical inactivity, tobacco use, and harmful use of alcohol. NCDs have emerged as the leading cause of morbidity and mortality in Jamaica over the last 30 years. Data from the Statistical Institute of Jamaica (STATIN) show that for 2009, diseases of the circulatory system, neoplasms, endocrine and metabolic diseases and disease of the respiratory system accounted for approximately 60% of death among men and 75% of deaths among women. Recent national surveys have also documented an increase in the four major behavioral risk factors and NCDs such as diabetes, hypertension and obesity among Adults. The World Economic Forum estimates the economic burden from life lost due to the four major NCDs was $22.8 trillion in 2010 and if business as usual continues we expect this to increase to $43.3 trillion in 2030.

Last March, the Ministry of Health launched a physical activity guide and toolkit for the workplace, as part of efforts to promote healthier lifestyle practices as well as combat some of the health problems facing Jamaicans.

The physical activity guide and toolkit aims to establish workplaces, whether public or private, small or large, rural or urban, as supportive environments that can facilitate persons receiving the most or all of the recommended physical activity for the day.

For adults 18 to 64 years old, the recommended amount of activity is at least 30 minutes, five days a week.