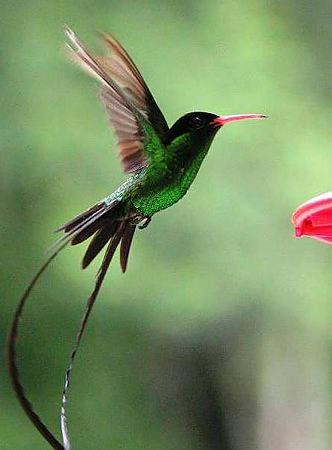 The ‘doctor bird,’ red-billed streamertail or scissors tail hummingbird, is indigenous to Jamaica. It is one of 320 species of hummingbirds, three of which are found only on the island. The other two are the mango hummingbird (Anthracothorax mango), which was here before the mango itself arrived and is a dusky purple colour. The other is the vervain or bee hummingbird (Mellisusga minima), which next to the Cuban Calypte, is the smallest bird in the world. All hummingbrids seem to favour the colour red, hence their red syrup filled feeders. The black billed hummingbird is found in the east, and the red-billed hummingbird is found islandwide. The Tainos, the first inhabitants of Jamaica, called the doctor bird the ‘God’ bird, because they considered it to be the reincarnation of dead souls.

The species is aptly named as a result of its ability to fly backwards, producing a humming sound from the rapid fluttering of their wings. Iridescent like all hummingbirds, there are many stories that explain the naming of the doctor bird. One states that it is called ‘doctor’ because the long, black tail of the adult male resembles the long, black tail coats doctors were known to wear in the past. Another explains that it is called doctor because it gives medicine to the plants when it lances the flowers with its long bill. Yet another explains that is because it is associated with tobacco, a ritual plant also used as medicine by Taino shamans (medicine men).