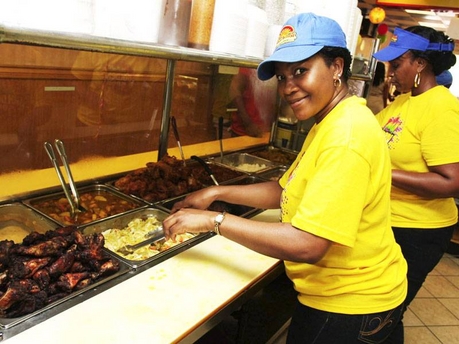 There is nothing quite like the vibrancy of our Caribbean cuisine: colourful, spicy, sweet and delicious. Indeed, for many Jamaicans and other Caribbean nationals living abroad, one of the things they miss most from ‘back home’ is the food. There are restaurants that cater to their gastronomical needs, and many cook their own meals so they can still have their favourites. Today, our National Caribbean American Heritage Month (NCAHM) feature looks at some of these establishments that help to give our Caribbean brothers and sisters in the USA a taste of home.

Golden Krust was founded in 1989 by Lowell Hawthorne, his wife Lorna, four of his siblings and their spouses. They pooled their resources to open the first location on East Gun Hill Road in Bronx, NY. The restaurant was the brain-child of Ephraim and Mavis Hawthorne, who owned Hawthorne & Sons Bakery in St Andrew. Over the next seven years, a total of 17 restaurants were opened across New York City. Encouraged to create franchises, the family duly obliged and in 1996, Golden Krust became the first Caribbean-owned business in the US to be granted a franchise license. The company also relocated its plant from East Gun Hill Road to Park Avenue and eventually bought the entire block from 172nd Street to Claremont Parkway.

Today, there are some 120 Golden Krust stores across nine states (New York, New Jersey, Connecticut, Pennsylvania, Georgia, Florida, Maryland, North Carolina and Massachusetts), serving a variety of palate-pleasing fare including nine varieties of patties, ackee and saltfish, oxtail, jerk chicken, rice and peas, dumplings and more. Patrons include members of the West Indian community, including pop star Rihanna, and many others.

Royal Caribbean Bakery was founded by Vincent and Jeanette HoSang in 1980, on Dyre Avenue in the Bronx, NY. It currently operates in the New York area as well as Atlanta, Georgia, offering a variety of products, including hard dough bread, spice buns, coco bread, patties, bullas and fruit cakes. RCB is the distributor of the frozen food line Caribbean Food Delights, also based at the Dyre Avenue location. It was founded in 1984. Foods in the line include the wings as well as the ‘traditional’ beef, chicken, seafood and vegetarian patties, as well as more ‘exotic’ fillings such as jerk chicken, chicken pot pie, spinach and spinach and cheese. 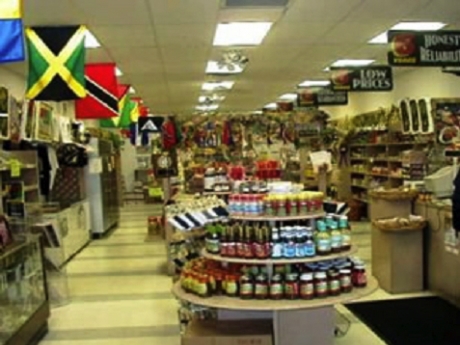 If you are looking for your favourite brands from back home, head to Sam’s. It stocks products from all over the Caribbean, not just food. It offers more than 30 popular Jamaican food brands from which to choose, many of which operate locally. Brands include Blue Mountain, HTB, Jamaica Biscuit Company, Walkerswood, Lasco, Grace and Benjamins. It also distributes Golden Krust and Caribbean Food Delights patties. Sam’s is located in West Hempstead, Long Island, NY, but purchases can also be made online.

First World Imports provides premium Caribbean products can be found in many chain supermarkets, wholesalers, grocery stores and restaurants in Florida, where it is located, and throughout the United States. It offers a variety of Jamaican brands in products such as bulla, bread, buns, coconut milk, drinks, cheese, sauces, soups, spices and seasonings, syrups, teas and more. Brands include Caribbean Dreams, Easispice, Lasco, Linstead Market Jamaica, Mountain Peak and Walkerswood. It is also the owner of the popular Caribbean Sunshine brand, which boasts canned ackee, canned callaloo, authentic Jamaican hot pepper sauces, bullas, breads and guava jelly, which was originally developed by family matriarch Grandma ‘Dolly’ Scott more than 80 years ago.