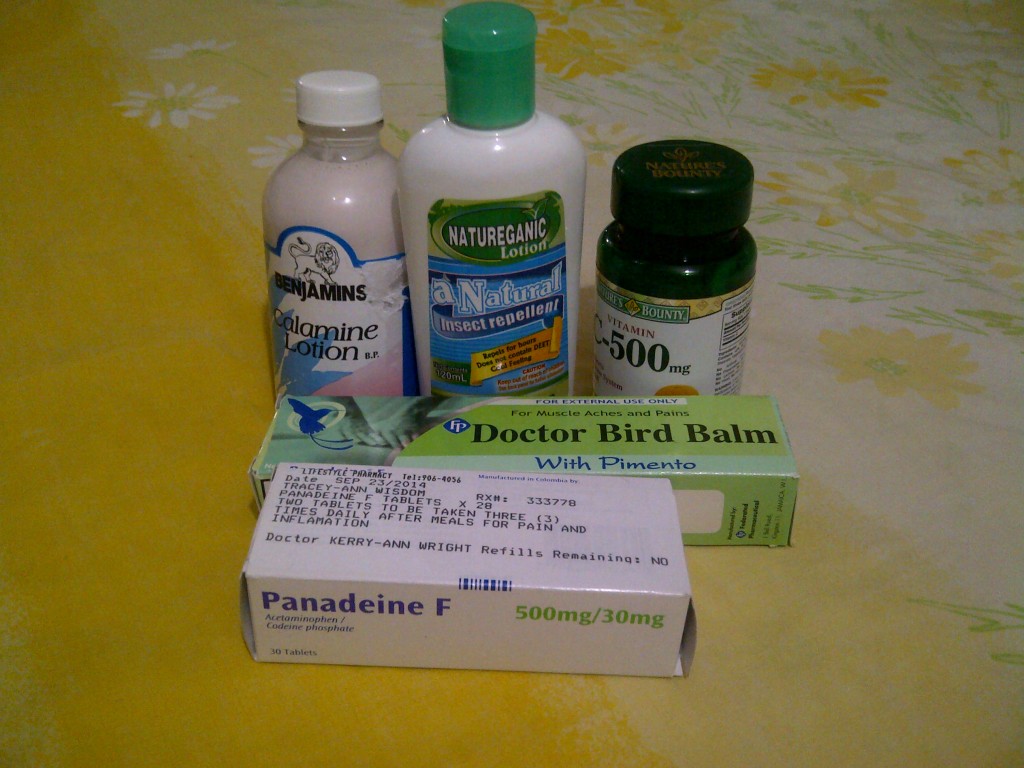 I am the third person in my household to ‘catch’ the dreaded chikungunya virus. My mother and brother had it simultaneously about a month ago, and since a good amount of time had passed, and we had turned the whole house into a mosquito death trap, my sister and I thought we had escaped. I was wrong, so wrong.

Monday – What trouble is this?!

I woke up last Monday feeling the way I do about all Mondays (not impressed), but had an additional reason to be grumpy – everywhere from my toes to my knees was in pain and I had some discomfort in my back. I ignored it and got ready for work, thinking I must have over-exerted myself while rearranging my room the day before. I hobbled to work, where the pain increased over the course of the day, beginning to affect my arms as well. I went to the nurse, who gave me some Painol tablets and told me to come back in one hour. If I wasn’t feeling any better, I was to go home. One hour later, I only felt worse. I had developed a headache as well, so my supervisor and several coworkers none-too-subtly ‘encouraged’ me to go home, and I was given a ride to Parade to catch the bus.

I stopped at a doctor’s office near my home and was given a prescription for Panadeine tablets and vitamin C, and three days sick leave. By then, it was around 4pm, and I think it took me 15 minutes to make the usually five-minute walk to my house. I collapsed in bed and woke up in searing pain at about 7pm. Pupa Jesus! Every. Thing. Hurt. My toes were on fire. My ankles were on fire. My knees were on fire. My back, my elbows, my fingers, my wrists. My WRISTS! At one point, I fell asleep on my right hand and woke up practically screaming. It felt like someone had run over my wrist with a small steamroller. Dios mio! And as if that wasn’t enough, I was burning up and freezing at the same time. I have a blurry recollection of possibly fighting my mother for my pink fleece blankie, as she tried to take it away from me so I wouldn’t spontaneously combust.

That night into early Tuesday morning is one of the worst periods of my entire life. Even though I was medicated, I could not sleep due to the pain and fever. I couldn’t find a comfortable spot to rest, so at one point, I just sat propped up on my pillows, hoping and praying for the pain or fever to ease, or to just pass out. I just wanted it to be over. I finally slept at around 6am, but woke up in abject pain three hours later, hating the world.

I honestly can’t remember anything except being in pain, burning with fever and feeling wretched. Bathroom breaks were an adventure in ‘holding it in’ while taking a year to crawl to the commode. Even though my mother and brother had previously experienced chik v, they confessed that they hadn’t experienced as much pain as I was dealing with. Nonetheless, that didn’t stop them from finding amusement in my situation, mimicking my shuffling and calling me Grumpy Cat. My sister basically scorned me the entire time. She’d better hope she doesn’t get it, because I will return the favour.

Thursday – I think I see a light! Or I’m hallucinating…

That was the day I was supposed to have returned to work, since the doc had only given me three days off, including the Monday (I really can’t understand the logic behind that, but I digress.) I woke up feeling stiff and sore in the legs and arms, but the fever had gone and I thought I might be ok – until I got out of the bed and the room rotated on its axis. I saw black spots floating before my eyes and what looked like ants running up and down my wall. This was also quite amusing to my family. I went right back to bed.

Later in the day, I had to go to the ATM because there was no one else at home and there was no food in the house (the worst time to get sick? A couple days before payday. Yikes!) I went on the road in my best interpretation of ‘unwashed chic,’ with my tie-head on and everything. A woman in the line at the pharmacy side-stepped me and looked at me like I was crazy. I managed to get calamine lotion for the itching I was dealing with since Wednesday, muscle rub for the pain and mosquito repellent to close the barn door after the horse had already completed a circuit of Caymanas Park, obviously. I also got some snacks and bought a small box lunch, because it had been days since I had eaten anything substantial. I got back home and promptly had to lie down on the floor as the whole place again began to spin. I eventually managed to eat some of the food, but it didn’t stay down, so I abandoned the idea of eating for the rest of the day. 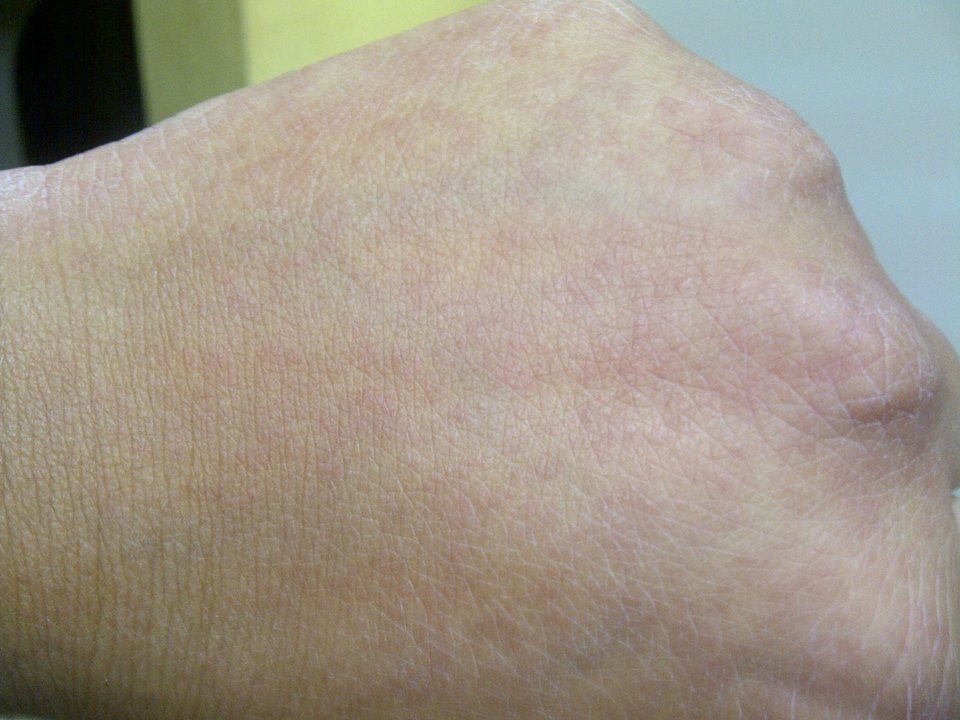 I woke up bright-eyed and bushy-tailed, relatively bump-free, pain-free and not light-headed, so I thought it would be ok to return to work. On my way, I noticed that I was itching a bit more than I had been for the past few days, but I paid it no mind. Only to get to work and, under the harsh fluorescent lights, watched as my skin… mutated, for lack of a better word. Apparently the bumps I’d been scratching (against everyone’s advice) all week had nothing to do with the rash. This was the real thing. Everyone in my office practically chased me back out the door and told me not to return until I was fully recovered.

Another goody: I noticed a swelling at the back of my head when I woke up, but I ignored it also because I was recovered. Yay! Well, it quickly made several friends along my neck, in my underarm area and other places where lymph nodes reside that shall not be named. The doc had told me this might happen, but (to quote Dutty Berry), my word, my sentence, my paragraph!

I was covered in a red, itchy rash literally from scalp to soles. I promise you, my palms and soles were itchy, red and bumpy. My fingers started to swell. I seriously considered taking the Calamine lotion internally, in the hopes that it would work faster. The worst part is that I was unable to shower that night because even soso water burned my skin. ‪#‎FixitJesus‬

Here’s to the weekend – More of Friday

Someone told me to try one per cent hydrocortisone cream for the rash instead of Calamine lotion and get a DPH or Histal anti-allergy syrup‬. I also got a tub of emulsifying ointment to use in lieu of soap, because I was going to bathe, by the hook or the crook! I drank the Histal like water and used the cream like it was lotion. By Sunday afternoon, the rash had faded significantly and I was starting to feel like myself again.

Yesterday and today – Still in pain, but I’m back!!!

I decided to give myself an extra day to make sure all was well and went back to the doctor for confirmation. She was alarmed by the size of some of my swollen lymph nodes and prescribed antibiotics. One lump on the right side of my neck was so big and painful that I couldn’t turn my head.

Today, I’m generally feeling like myself again, even though I’m still a little stiff and sore in my legs, some lymph nodes are still swollen and painful and I still have a little itchy patch on my back.

In the midst of my ordeal, I also got the news that my grandaunt had died, and chikungunya was being blamed. Aunt G was a fairly healthy nonagenarian, but she had fallen to the virus about a week before I did. She had seemed to be on the mend, but took a turn for the worst on Sunday, was hospitalised on Monday and passed away on Tuesday.

I close by imploring everyone who reads this to take every precaution possible. Trust me, you do not want chik v. It is truly awful and I wouldn’t wish it on my sworn enemy. If you have babies, small children or elderly relatives at home, take extra care, because if it was so debilitating to me, a young woman in my late 20s, I can’t even imagine what it would be like for someone who is relatively helpless.

Read more about chikungunya in Jamaica.

Tracey-Ann Wisdom is the content and community specialist for diGJamaica.com