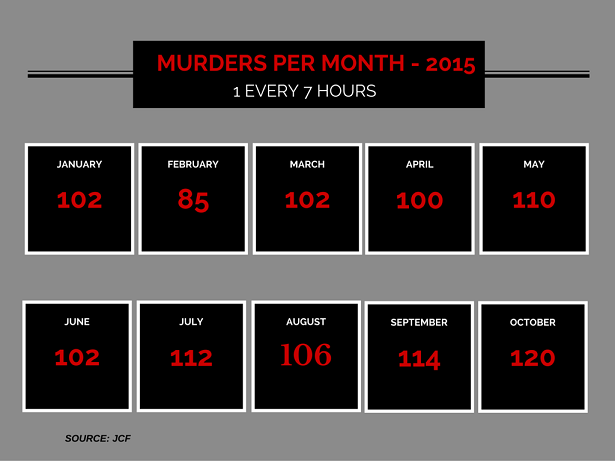 Up to Monday, November 23, the number of homicides committed in Jamaica since the start of 2015 stood at 1,116. Broken down, that means that one person is murdered every seven hours, according to the Jamaica Constabulary Force (JCF). This means that more Jamaicans have been murdered in 11 months this year than for all of 2014, when the country recorded its lowest murder rate in a decade – 1,005.

While the number of murders continues to get out of control, the Criminal Investigation Branch (CIB) of the JCF is seeking to reassure the public that their efforts to arrest the perpetrators are bearing fruit. “We have had a significant increase in our clear-up rate, which is the best over the past 10 years. The figure has moved from the low 30s to 49 per cent so far this year, and we are hoping to push the clear-up rate to 51 per cent by the end of 2015,” Assistant commissioner in charge of crime, Elan Powell, said during an interview with The Gleaner yesterday.