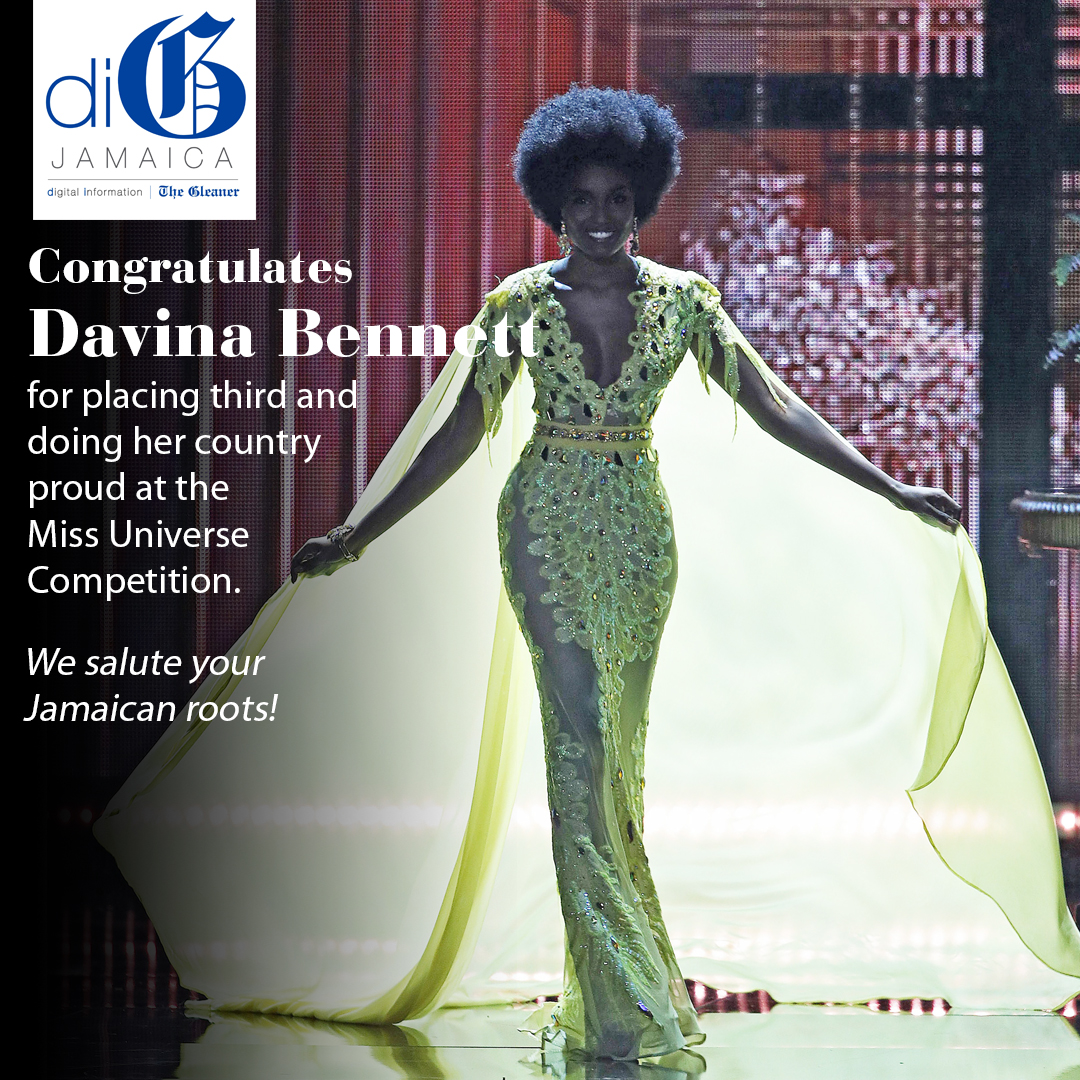 ‘Rooting’ for Jamaica took on new meaning at the 2017 staging of the Miss Universe Competition. By the time the pageant’s top three finalists were announced, social media had its own mini-movement going. Jamaicans, Caribbean nationals, blacks, people of African descent, and people standing in solidarity with people of black and African heritage, all took to Twitter, Facebook and Instagram to herald the revolutionary face of beauty, embodied in Jamaica’s representative, Davina Bennett, who won second runner-up (third place) in the international competition. The hashtags that ruled the night were #Jamaica, #blackgirlmagic, #MissUniverse, #afro and #Davina.

It was Davina’s ‘rootsy’ hairstyle that stole the spotlight. Instead of the usual straight hair, which has been a staple to international pageants from time immemorial, the Jamaican queen opted to sport a natural, kinky Afro hair. In doing so, Davina managed to steal the spotlight, the show, and the hearts of spectators around the world. The hairstyle she wore, and her very dark skin tone, immediately represented validation for millions of natural-haired black women (and men), and struck a blow to the stereotypical, non-inclusive definition of beauty that has been popularised by mainstream media for years.

Speaking to the significance of Davina’s look on an international stage, Miss Jamaica World 2005, Terri-Karelle Reid, said, “When it comes to black beauty, black magic, black accomplishment, black image … we aren’t always portrayed in the most beautiful light. And self-doubt and self-hatred is something that resonates within the black community, especially among girls, because we do not see images that we can relate to, and that reflect our beauty. …

“What [Davina] has been able to do is to keep the conversation going and inspire a lot of little girls around the world who look like her – same colour, same natural hair – to achieve their goals and dreams and know that they’re beautiful despite what the world wants to show them or tell them. [Davina reminds us that] we are here to break those molds and tell little girls to wake up, to love themselves more.”

Terri-Karelle, who, ironically, also wore a natural Afro at her pageant, said that Davina’s triumph was particularly special for her because it represented a progression of the conversation about acceptance of the many faces of black beauty, and the need to remain true to who you are. Regarding the reactions to her hairstyle at her own pageant, Terri-Karelle said: “I am still under the impression that the very thing that some people would have had me change was the very thing that made me stand out. My mantra going into Miss Jamaica World, and my mantra even now, is to never be content with someone’s definition of you. You have to step into your greatness unapologetically, and that is what Davina did.

“I am extremely proud of her. My message to her is that sometimes you have to lose to win, and the opportunities that she will be afforded will be far greater, far more extensive in the position she’s in now than maybe if she had won. I did it 12 years ago, and I did not accomplish what she has, but there’s one similarity: the people who try to convince you that changing to suit the norm is in your best interest. My experience is that understanding yourself, and being your truest form is just the best way to show self-love. I’m happy that 12 years later, we have an Afro queen standing and representing this so clearly for us.” 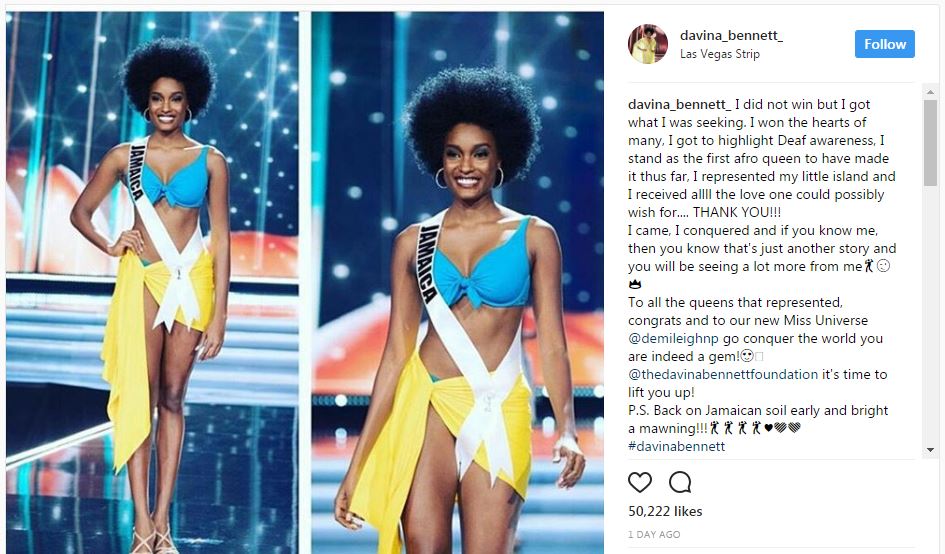 The responses to her hairstyle, especially on Twitter, were unanimous:

#MissJamaica‘s hair is giving me life. Representation is everything man. 😢#MissUniverse2017 pic.twitter.com/qAYZT2m2zL

No man! Davina Afro wake me up likkle while! All a mi ancestors tump me one time. 😍😍😍😍😍😍 And that sunshine yellow on stage! Come through Queen! #MissUniverse #DavinaBennett #MissJamaica

When a young woman who looks like the majority of Jamaica’s beautiful Black women who nuh mix wid nutten but awesomeness is doing the damn thing at #MissUniverse #MissJamaica pic.twitter.com/SUdltgqs5d

A #MissJamaica that looks like the majority of the 95 % Afro-Jamaican population. Massive Afro in tow. This is a good look. I wish her well. https://t.co/Ozlb5S0En5

Your presence and passion radiated on that stage. Every curly haired child and adult will look to you and believe that their essence should never be tamed. We see now that you were wearing the crown this whole time. ❤🇯🇲 #MissUniverse #Jamaica pic.twitter.com/MCE0HLb77J

We already won. Keep the man made crown, she wears the natural one.#Jamaica pic.twitter.com/GfwrrXdIK1

Never ever be content with someone’s definition of you! Don’t ever have the desire to FIT IN ! Step into your greatness UNAPOLOGETICALLY! You can do this! Get to work! The world awaits you! #MissUniverse #Jamaica