High in the hills of the St James section of the Cockpit Country, at the end of the long, winding mountain road, there is a district called Flagstaff. It is part of a region extending all the way to north St Elizabeth that used to be called Trelawny Town. Many decades ago, the residents were all Maroons, who valiantly defied British colonisers, and were subsequently left alone to carry on their lives in that rocky place.

As time passed, other people moved in, the culture and population became diverse, some descendants and offspring moved out of the region and the Maroon culture became diluted. This is basically the story of all the Maroon villages in Jamaica. But while districts such as Accompong Town in St Elizabeth, Charles Town and Moore Town in Portland and Scotts Hall in St Mary have got much local and international publicity, St James’ Maroon Town and Flagstaff seem to be forgotten places in the annals of Maroon history

Flagstaff features considerably in the Maroons Wars which begun in 1795. After the war, barracks were built on the old town now known as Flagstaff. By 1838, fifty nine buildings were occupying this site. 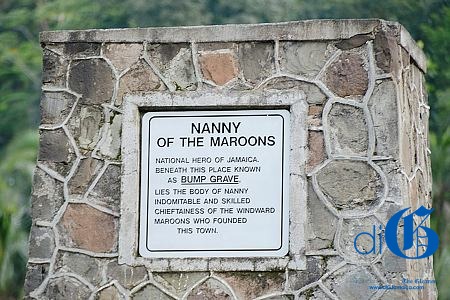 Hilly and rugged Moore Town sits in the heart of Portland’s Maroon country. Like Accompong, it was formed in 1793 when Cudjoe signed a peace treaty with the British.

At first, Nanny refused to sign a treaty with the British but eventually agreed to a truce. At first, the Maroons were 500 acres of land after the signing of the treaty. Nanny realised that this allotment was not enough for their needs and made a request to the British government in 1781. They were granted a further 1,270 acres, which was called Moretown. Due to misunderstanding and errors, the name was recorded in the survey document as ‘Muretown’ and later ‘Moore Town.’ Maroons also live in neighbouring Cornwall Barracks.

Nanny’s Maroons divided themselves into two groups, one of which went with her brother Quao to Crawford Town and the other followed her to a new settlement, New Nanny Town, now called Moore Town.

The site of the former town is on Nanny Town Hill, some 2,000 feet above sea level. Nanny Town is said to have had more than 140 houses in its heyday, many of which were burnt by the militia but re-built by the Maroons during the four years of fighting which preceded the treaty.

Moore Town’s main site of interest is Bump Grave, an oblong stone and plaque that marks the grave site of Nanny.

Scott’s Hall is the principal home to the St Mary Maroons. It was established after the first Maroon War ended, around the same time as Moore Town in 1793. The Scott’s Hall Maroons celebrate the signing of their peace treaty with the British on August 1, which is Emancipation Day.

Scott’s Hall is today a subsistence farming community, where many medicinal herbs and other plants can be found. It is one of the lesser known Maroon settlements and seems to have been forgotten by most Jamaicans. However, with support from various agencies, the leaders will be embarking on developing a more sustainable agricultural programme, which includes production of breadfruit, red peas, vegetables, bananas and yam.

The town is now under the leadership of Colonel Rudolph Pink.