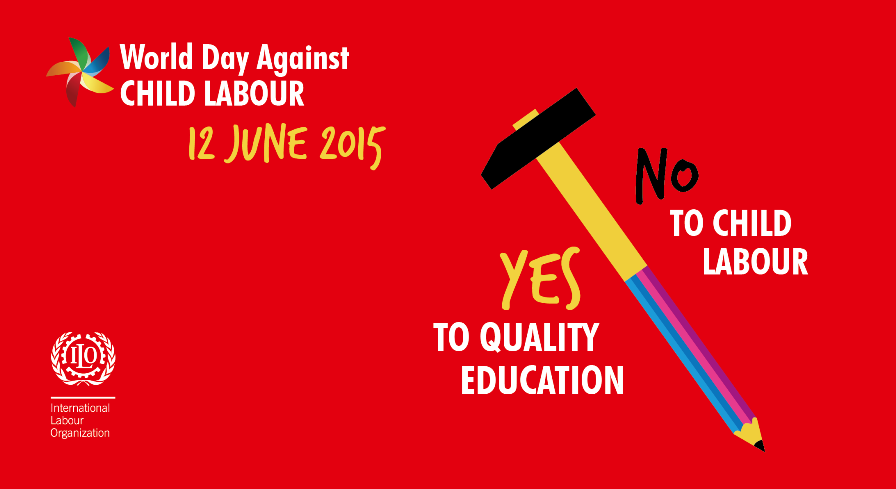 Today is World Day Against Child Labour, an initiative of the International Programme on the Elimination of Child Labour (IPEC) in the International Labour Organization (ILO). This year’s focus is on the importance of quality education as a key step in tackling child labour around the world. According to the IPEC, “It is very timely to do so, as in 2015 the international community will be reviewing reasons for the failure to reach development targets on education and will be setting new goals and strategies.”

The IPEC calls for:

What is child labour?

Not all work done by children should be classified as child labour that is to be targeted for elimination. Children and adolescents can benefit from tasks such as helping with household chores, assisting in the family business outside of school hours and on weekends. It becomes problematic when the work children are made to do “deprives them of their childhood, their potential and their dignity, and that is harmful to physical and mental development. Generally speak.”

“Child labour” refers to work that is mentally, physically, socially or morally dangerous and harmful to children, and interferes with their education by depriving them of the opportunity to attend school, obliging them to leave school prematurely, or requiring them to attempt to combine school attendance with excessively long and heavy work.

In its most extreme forms, child labour involves children being enslaved, separated from their families, exposed to serious hazards and illnesses and/or left to fend for themselves on the streets of large cities – often at a very early age. Whether or not particular forms of “work” can be called “child labour” depends on the child’s age, the type and hours of work performed, the conditions under which it is performed and the objectives pursued by individual countries.

Last June, Labour Minister Derrick Kellier announced that an estimated 16,240 Jamaican children are involved in child labour. Here are some more numbers from around the world: