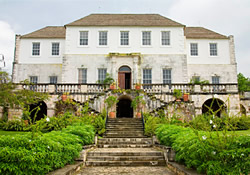 Jamaica is home to many legends and stories, one of which surrounds Annie Palmer, very often dubbed the “White Witch of Rose Hall.” The legend dictates that Annie Palmer was born in England and moved to Haiti in her youth, where she had a nanny who is said to have introduced her to witchcraft and voodoo. Annie was left in the care of her nanny, after losing her parents to Yellow Fever.

Upon moving to Jamaica, it is said that Annie married a man by the name of John Palmer who owned the Rose Hall Great House and Plantation in Montego Bay. Annie was ruthless and used her dark magic as a manipulative force, constantly mistreating the thousands of enslaved persons working on the plantation. In addition to this, the legend states that Annie killed her husband John as well as two more husbands that came after him. It is also said that Annie took several slave lovers in her husband’s absences.

The circumstances surrounding Annie Palmer’s death are shrouded in mystery and several theories exist to explain how she died. However, most accounts agree on the involvement of an enslaved man called Takoo, who is described to be one of Annie’s many lovers.

Accounts state that Annie’s body is buried in a tomb on the plantation. This tomb was allegedly sealed using a voodoo ritual in order to keep her spirit inside. However, this ritual was botched or incomplete and it is said that Annie’s spirit can be seen roaming the plantation either on her horse or on a balcony.

It must be noted that the legend of Annie Palmer is widely contested. Historians and Anthropologists alike have argued that the story’s content is completely false, and that the popularity of this fallacious legend began with the publishing of the novel, “The White Witch of Rosehall” by Herbert G. De Lisser. In his defence, De Lisser did point out that the story was fictitious.

Regardless of its inaccuracy, the legend of Annie Palmer has had a significant cultural impact on Jamaica. Her story is known across the world, having been widely spread by members of the diaspora, as well as persons who have visited the Rose Hall Plantation. In 1973, American country singer Johnny Cash made Annie Palmer the subject of his song “The Ballad of Annie Palmer”.

Today, the Rose Hall Great House remains one of Jamaica’s most well-known and visited tourist attractions, allowing the Jamaican tourist industry to largely capitalize on its haunting tale.

Will you visit the Rose Hall Great House to test the theory of Annie Palmer’s roaming spirit?