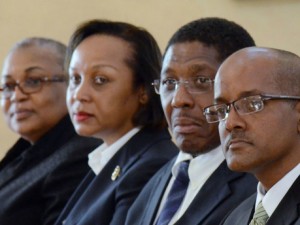 In Jamaica there are 2 legal organizations of note: The General Legal Council and the Jamaican Bar Association.

From the General Legal Council:

Prior to the passage of the Legal Profession Act 1972, there were two sets of lawyers. They were known as solicitors and barristers. The Act abolished those distinctions, and all lawyers were hence forward referred to as attorneys-at-law. The Legal Profession Act created the statutory body known as the General Legal Council.
The General Legal Council is comprised of seventeen members. Fourteen of these members are legal practitioners nominated by the Council of the Jamaican Bar Association, the Chief Justice or her nominee, the Attorney General or her nominee, and one nominee of the Minister of Justice. All nominated members are appointed by the Minister of Justice after being recommended by the relevant person or body.All members serve for a period of three years and are eligible for re-election. The General Legal Council appoints its chairman from among its members. The Council has been given the statutory mandate and responsibility under section 3 of the Legal Profession Act to:

The Prime Minister and Parliament

The Courts make up one third of the Government of Jamaica, namely the Judiciary. The other two branches of governments—the Executive (Prime Minister) and Legislature (Parliament)—also play an important role in the legal system of the island.
The Petty Sessions, Resident Magistrate’s and all other similar courts are the creation of Statute, that is, they have been created by acts of law created by either the Legislature or Executive.
A key player in the legal world is the Ministry of Justice. To see all the laws passed by Jamaican Parliament and for an in depth explanation of the role of the MoJ and the Attorney General see here.