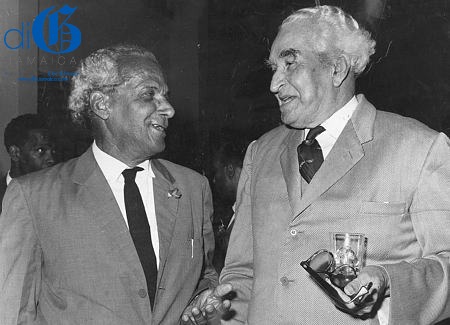 The year 1938 was a turning point in the history of modern Jamaica. Workers across the island began to demand better wages and working conditions and the colonial government had no choice but to listen. Strikes by the sugar workers of Frome in Westmoreland, the dockworkers of the Standard Fruit Company in Kingston and farm workers in Islington, St Mary led to mass rallies and public meetings, the likes of which had never been seen on the island, not even the decade before during the height of Garveyism.

The leader of these meetings and of the negotiations on behalf of the workers was one Alexander Bustamante. By June 1938, following a period of incarceration, he had co-founded the Bustamante Industrial Trade Union (BITU), serving as its president and chief financier.

In that same year, his cousin Norman Manley, who had mounted platforms to speak to workers upset about Bustamante’s incarceration and attempted to keep the peace while he negotiated Bustamante’s release from jail, began to articulate the need for a political movement alongside the growing trade union one. Manley believed this was essential in order for Jamaica to achieve self-determination for its citizens. The events of 1938 were so monumentous that it was felt that a national political party had a better chance of survival as a result of the increased national awareness. To that end, Manley and a group of delegates formed a seven-member steering committee to draft a founding constitution and prepare the People’s National Party’s formal launch slated for September
18, 1938 at the landmark Ward Theatre in downtown Kingston.

Following another period in jail, Bustamante decided to act on intentions formed during his imprisonment to build a political party, despite the fact that the conditions of his release forbade him to speak in public or to more than 49 persons at any one time inside a building without official permission, and to leave Kingston without notifying the police. Increasingly, Bustamante felt the socialist tendencies of the PNP were not in keeping with his own belief in free enterprise, and therefore, both his union and the new party would move in a different direction. The Jamaica Labour Party came into existence on July 8, 1943. The first general election under Universal Adult Suffrage came in 1944 and the JLP won 22 of the 32 seats. Bustamante became the first Prime Minister of Independent Jamaica in 1962.