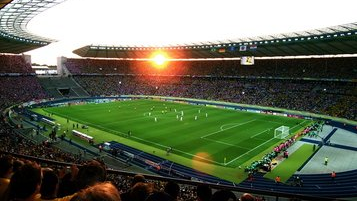 It’s the greatest game on earth, they say. And it is the world stage on which teams from all over the globe dazzle and bedazzle with their nifty passing and juggling skills, in quest of ultimate football glory. As things go, whether it be Premier League games, CONCACAF matches or local school boys’ fixtures, Jamaica is football central. And this investment of passion and emotion heightens when it comes to football’s crown moment – the World Cup.

Unfortunately for the country, save for 1998, when they qualified to be part of the excitement in France, the nation has been largely unsuccessful in its bid for World Cup glory. That leaves Jamaicans adopting other nations during the silly season, and supporting and defending these teams as if they were from ‘yard. Here are some of the nations that get most Jamaicans’ support during the World Cup season.*

The Yellow and Greens have gotten unflinching support from Jamaicans over the years. Not just because they share two of our flag colours, but also because they generally do well in the World Cup and have produced some of the world’s best strikers and defenders. Boasting players like Pele, Ronaldo and Ronaldinho, Brazil is regarded by many Jamaicans as the world’s football mecca.

Currently ranked number one in the world for football, Germany has featured in 19 World Cups, and has won four of them. Like Brazil, they have a track record of consistency in producing stellar footballers, and for dominating matches. This has earned them the admiration and loyalty of many Jamaican supporters.

Since the days of Maradona, Argentina has been a staple on some Jamaicans’ football calendar. They live and die on the blue and white. This year, their captain Lionel Messi, commands a huge following, based mainly on his Premier League performances for his football club. Even if the team does not fare well, the supporters are adamant that it is Argentina for life. This team has appeared in 17 World Cups and won two.

Russia’s football performance has had its hills and valleys. However, their supporters are adamant that this year’s team is the one to beat. Russia has appeared in 11 World Cups, and has only managed a best placement of fourth overall in the 1960 edition. This might be the year, say their Jamaican fans. And judging by their performances thus far, this might very well be the year.

They’ve played in 15 World Cups and have won one – the 1966 edition. But, according to fans, England is poised and ready to do it again in 2018. Colonisation aside, England has won Jamaica’s heart in football, and their fans are nothing short of fanatical about this red-blue-and-white team.

* The results are based on diG’s observation, as well as an informal poll conducted among colleagues. What do you say? Was your team included in this list? Do you think there was a team that belonged on the list that was omitted? Send us your feedback at dig@digjamaica.com.