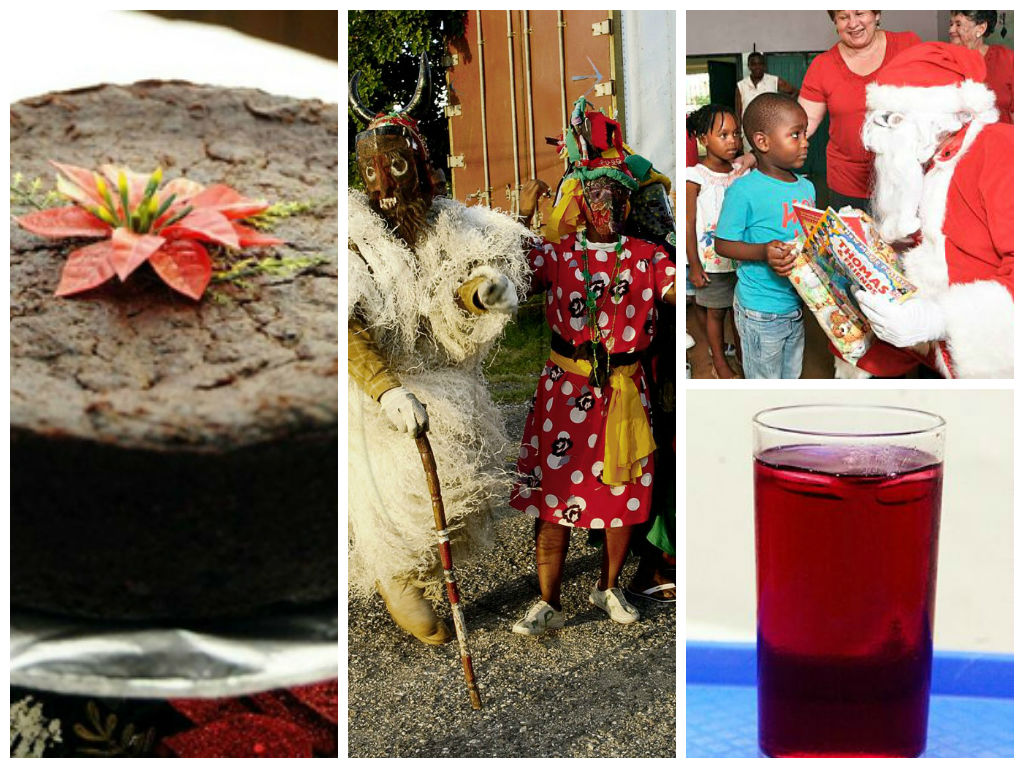 Santa Claus, snow, evergreen fir trees, egg nog and bright lights are the images typically associated with Christmas all around the world, even in places where snow doesn’t exist. In Jamaica, our traditions do include some of these things mentioned, but we also have our own unique items and activities, such as Jonkunnu, Grand Market, Christmas fruit cake and sorrel. The season is usually heralded by cooler temperatures and a bracing wind, know as  ‘Christmas breeze.’

We continue our 12 Days of Christmas series with a look at some of these things that make Christmas in Jamaica truly special.

Jamaicans take Christmas seriously. Very, very seriously.   And there is nothing that symbolizes how much preparation and forethought goes into the one day than in the baking of the Christmas Cake. Several pounds of dried mixed fruits, prunes, raisins, cherries are purchased and soaked in rum and red wine months in advance and the grumblings about the high cost of basic food items die down as homemakers set out to buy around 20 different ingredients for one dish. Even the thought of the cost of a cylinder of LPG goes out the window as we cram our stoves with cakes for mommy, daddy, co-workers and anyone who will be stopping by during the season… Read more

The Christmas Wonders of Sorrel

A chilled glass of sorrel is one of the culinary highlights of a Jamaican Christmas. Weeks before the actual holiday, homemakers and foodies are busy preparing the spicy beverage to give the rum, pimento and ginger more time to mingle for a richer flavor. However, there is so much more to the carmine-hued bud than meets the eye… Read more

Jonkunno, or John Canoe, is one of the most popular retentions from Jamaica’s colonial past that blends the masquerading styles of both Africa and Europe. Men dressed in colourful elaborate costumes would parade through the streets during Christmas and Independence to the delight of curious onlookers. Adults and children alike would run away screaming when characters like ‘the Devil’ would jab at them with his fork.’  The dance group would include musicians who would play rustic instruments like drums, rattler and fife as they walked among the costumed characters… Read more

Grand Market (or Gran’ Market) is a community fair characterised by food, street dancing, crafts and music. In the past, the weekend before Christmas and particularly on Christmas Eve and Christmas Day, markets all over the island were awash with vendors selling small toys, firecrackers, balloons and sweets of all kinds ­ pinda (an African word for peanut) cakes, grater cakes and peppermint sticks. Oranges and even American apples were distinctive features of the Grand Markets. Sorrel, chocolate tea and coffee flowed, as did the Christmas carols and a merry banter between vendors and customers.

On Christmas Day, some markets were decorated with streamers, large accordion-style bells, and balloons. Many were decked out in fancy clothes, including bright hats purchased upon entering the Grand Market. Everyone came to town for Grand Market and the celebrations lasted throughout the day and well into the night.

In decades past the Santa Claus Parade in downtown Kingston was a highly anticipated event. Streets were cleared of traffic so that Santa’s sleigh could glide down Kings Street onto Harbour Street. Times Store was his final destination. But Santa was not alone, as instead of reindeer and elves he would be accompanied by marching bands, troops of boy scouts and girl guides and floats carrying various beauty queens. Once the procession arrived at Times Store, Old Saint Nick would greet the owner of Times Store and the Mayor of Kingston. Then, one by one, hundreds of children would wait in long lines to share their wildest Christmas wishes with Santa as they sat comfortably on his lap… Read more