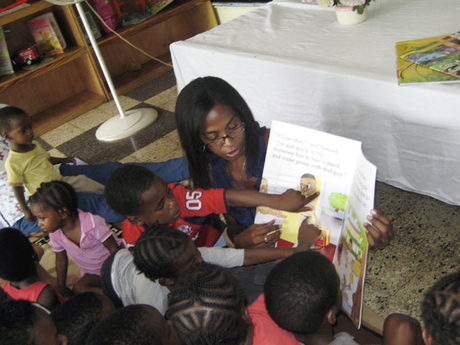 “Reading maketh a full man,” according to English philosopher, statesman, scientist, jurist, orator, essayist, and author, Francis Bacon. Indeed, reading opens up a world of experience outside our own and helps develop our imaginations, vocabularies and may even lead some to become writers. As with most things, it is always best to “bend di tree from it young,” so in honour of Child Month, we have compiled a brief list of Jamaican children’s books to entice and educate your little ones. And since we are in the information/Internet age, some of the books are interactive, some are available as e-books and one even comes with an app! Enjoy!

Anna Carries Water by Olive Senior (4-7): Anna fetches water from the spring every day, but she can’t carry it on her head like her older brothers and sisters can. This charming, poetic story shows young readers the power of determination, as Anna overcomes her fear to achieve her goal.

Little Lion series by Kellie Magnus (8 and under): When we first met young Rastafarian Zachariah Zion, aka Little Lion, he was struggling to fit in at school (Little Lion Goes to School). We next saw him overcome naysayers to save his school in a big cricket match (Little Lion at Bat) and in his latest adventure, he sets out to win a medal for his school’s track team (Little Lion Goes for Gold). 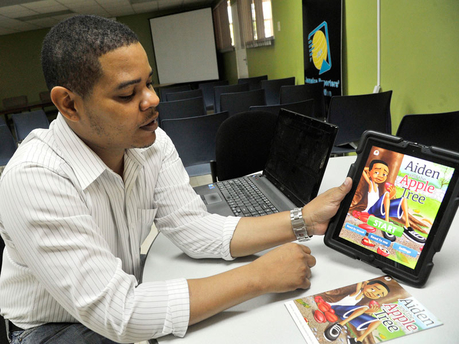 Aiden and the Apple Tree by Johnathon Kelly (4-10): This book and interactive mobile app tells the story of a boy named Aiden, who lives in a little village in Jamaica. He is given a small task, but gets into big trouble when he doesn’t stick to the plan. Along the way, he learns about honesty and hard work. The app (iTunes and Android) will allow children to become a part of the story as the book comes alive. Aiden and the Apple Tree is the first book and app from Kelly’s JuiceMan series, following the adventures of the inhabitants of a fictional rural community called ‘Little Patch.’

Nancy and Grandy Nanny by Rebecca Tortello (8-12): This historical children’s book is loosely based on the life of Nanny, Jamaica’s only national heroine. The story revolves around a little girl, Nancy, who is taken back to the 1740s. There she meets the Nanny of the Maroons, who teaches her lessons of courage and faith. Look out for more books as Tortello, popular for her ‘Pieces of the Past‘ series in The Gleaner, tells the stories of Jamaica’s national heroes, through interactions with children from the present era.

The Mermaid Escapade by Suzanne Francis-Brown (10-12): The story follows mermaids and three human children as they tackle the mystery of a wily and potent threat to their environment. The Mermaid Escapade is only available as an Amazon e-book in the US and UK stores.

No Boy Like Amanda by Hope Barnett (12-18): Set in rural Jamaica, No Boy Like Amanda, tells the story of eight-year-old Amanda Simpson, the only girl in a family with four boys. This doesn’t make life easy for her as she constantly tries to get in on a piece of the action with the boys, who always seem to be having loads of fun. But living in a family with meagre resources offers Amanda limited options to entertain herself; so she is determined to be ‘one of the boys’. No Boy Like Amanda was selected by the Jamaica Reading Association (JRA) and First Heritage Co-operative Credit Union (FHCCU) as the official book for their National Reading Week 2013 activities. 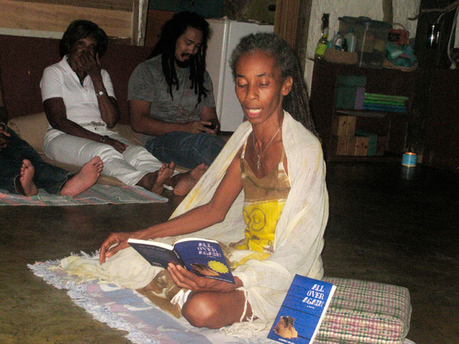 All Over Again by A-dZiko Simba Gegele (12-18): The series of 12 stories in All Over Again were inspired by the author’s then pre-pubescent son’s interest in the opposite sex and her rising phone bills. Told mostly from a second-person perspective, Gegele, also a poet, uses simple poetic lilt to convey subliminal, but powerful messages of the challenges of male maturation and determination. Gegele recently won the inaugural Burt Award for Caribbean Literature at the Bocas Lit Fest in Trinidad and Tobago. The book is also available in e-book format.

Inner City Girl by Colleen Smith-Dennis (12-18): Inner City Girl centres on Martina, a poor, “Milo complexioned 11-year-old” girl from the bowels of the inner city who lives with her mother, her 14-year-old brother, Shimron, and her 10-year-old sister, Yvette, in a yard in town. She gains entry to Milverton High, one of the most prestigious schools in the country, but finds herself in the position of an outsider. Martina and her dysfunctional family face a series of challenges throughout the story, as she tries to fulfill her ambitions. Inner City Girl is available in paperback and e-book format.