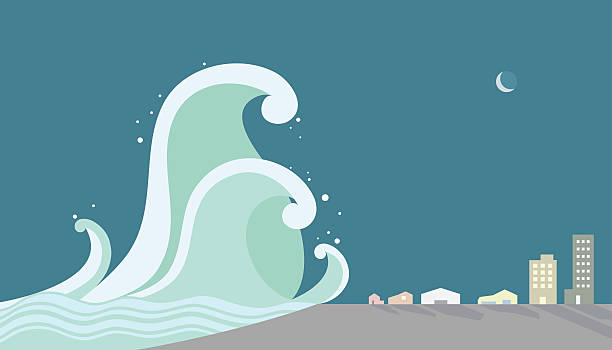 Tsunamis are a series of waves generated in the sea by sudden vertical displacements of a column of seawater. They come in all sizes from less than 1cm to tens of metres. An earthquake must have a magnitude of 6.5 or higher to trigger a tsunami. In addition, the earthquake must displace the sea floor vertically, either up or down.

Tsunamis cause damage in a number of ways: the force of the wave can destroy buildings, piers, bridges and other structures. Even relatively small waves can cause strong currents. Damage can also be caused by battering by water carried debris such as logs, boats, automobiles, etc. The retreating waves can scour the support for bridges, piers, breakwaters, etc. and cause failures. Chemical spills and fires caused by ruptured storage tanks are also common. Waves can also travel long distances up rivers as bores.

Jamaica has experienced two tsunamis before. They were in 1692 and 1907, following the two biggest earthquakes to ever shake the island.

In the first documented major earthquake in the Caribbean, Port Royal was devastated on June 7, 1692. According to this paper by Dr Margaret D Wiggins-Grandison, head of the Earthquake Unit at the University of the West Indies – Mona,

“The sinking of a part of Port Royal into the sea in 1692 caused a wave of 1.8 metres (6 feet) to cross the [Kingston] Harbour with a withdrawal of 274 metres. At Yallahs a withdrawal of 1.6 km is mentioned though not substantiated by the Tomblin & Robson earthquake catalogue or by any consequent damage reports. In 1907, waves of 1.8 – 2.4 metres were reported along the north coast between Portland and St Ann, accompanied by withdrawal of the sea by 70-90 metres. In Kingston Harbour, waves of 2.5 metres were observed. Both events followed strong to major local earthquakes which displaced land at Port Royal and probably along the north coast suddenly and vertically into the sea. There are no reports that anyone was killed by the tsunamis. The death toll from the earthquakes was 2000 out of a population of 8,000 at Port Royal (1692) and 1,000 in Kingston (1907).”

Other accounts have attributed some of the deaths to the tsunamis.

Of all the recorded earthquakes that have occurred in the region, the 1947 quake in El Cibao, Dominican Republic, is believed to be the largest. It reportedly measured magnitude 8.1 and generated a tsunami that caused 75 deaths and rendered 20,000 homeless, with aftershocks extending through 1947 and 1948. Another potential source for tsunamis, the submarine volcano Kick-‘em-Jenny, located 9 km north of Grenada, erupts on average every 11 years. At least two of those eruptions, in 1939 and 1965, generated small tsunamis that were witnessed on the north coast of Grenada.

Work is being done by the UWI’s Seismic Research Unit and others to develop an early warning system for tsunamis in the region. However, none currently exists. An interim arrangement exists with the Pacific Tsunami Warning Centre, who send a warning to specific government agencies in the Caribbean. A procedure for information dissemination to the public also does not exist, and is being developed.

Tsunami facts are taken from A Brief History of Tsunamis in the Caribbean Sea by James F Lander, Lowell S Whiteside and Patricia A Lockridge of the National Geophysical Data Center in Boulder, Colorado. Historical data comes from Tsunamis in Jamaica and the Office of Disaster Preparedness and Emergency Management’s website, as well as the Gleaner Newspaper Archives.