Whenever we think of a police officer or a soldier, the image that comes to mind for most of us is a man. That’s because these fields are traditionally male-dominated, in just about every country in the world. In many instances, women in these areas face an uphill battle to achieve status and equality.

Today, as we continue our celebration of Women’s History Month, we salute our local female law enforcement agents by looking back at the women who broke the glass ceilings in the Jamaica Constabulary Force and the Jamaica Defence Force. 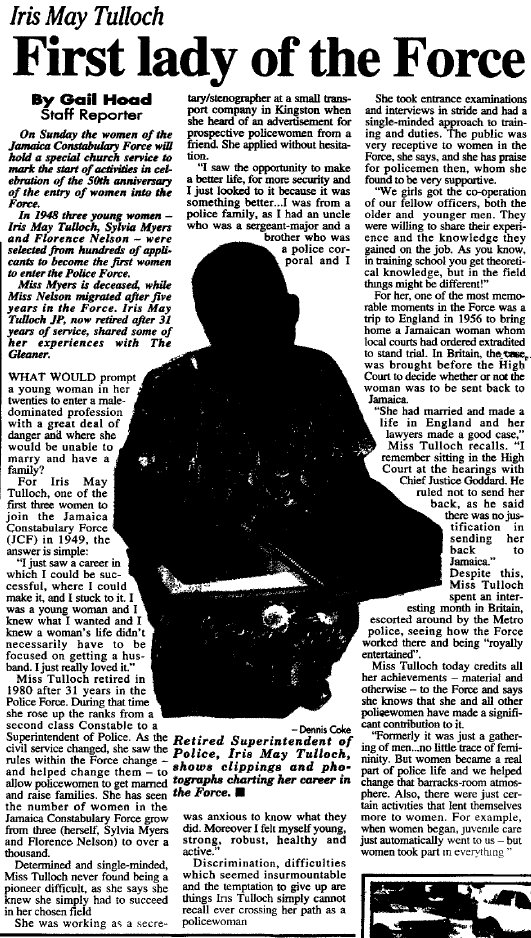 The first women to enlist in the JCF were Iris May Tulloch, Sylvia Myers and Florence Nelson. They were sworn in at the Police Training School and Depot on January 1, 1949. In 1948, the three young women were selected from hundreds of applicants to become the first women to enter the police force. Tulloch she attained the rank of Corporal in 1953, and five years later, she was promoted to Sergeant. In 1960, she was put in charge of female officers and made Inspector. She became Assistant Superintendent in 1967 and Deputy Superintendent in 1970, and her career was capped with the rank of Superintendent in 1976. Myers is deceased, while Nelson migrated after five years in the force.

Tulloch, who retired after 31 years of service, shared some of her experiences with The Gleaner on December 31, 1998. See the clipping below. She passed away in June 2014, at the age of 94.

Johanna Lewin-Belnavis was the first woman to attain the rank of Major in the JDF. She enlisted in the JDF on July 18, 1977 and was granted a commission in the rank of Second Lieutenant with effect from April 13, 1978. She served as a pilot in the JDF Air Wing, as the Officer Commanding the JDF Women’s Unit, as a Staff Officer at the Headquarters Jamaica Defence Force and as the Records Officer for the Regular Force. She was promoted to the temporary rank of Major on September 6, 1987. She retired from the JDF on November 26, 1989.