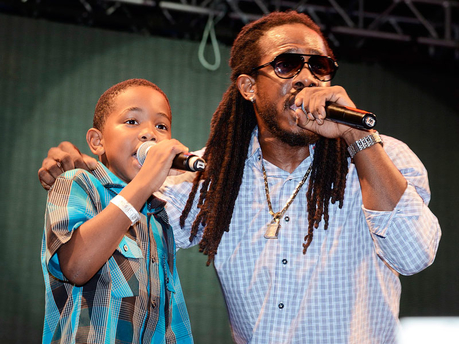 Wayne Marshall & Giomar – Marshall, born Wayne Mitchell, first rose to prominence in the early 2000s with hits such as Marshall Town, Check Yourself and Overcome. He has continued to make a name for himself since then, with hits such as Messing with My Heart and Good Ole Wife. He has released solo albums: Marshall Law (2003), Forbidden Fruit (2004) and Tru Story! (2008). He recently released the EP Tru Colours, featuring the hits  I Know, Go Hard and Stupid Money, which featured his eight year old son, Giomar. The younger Mitchell proved his chops first at the Shaggy and Friends benefit concert in January, when he matched his father and collaborator Assassin line for line, earning major ‘forwards’ from the massive crowd. He proved it was not a fluke a few days later at Tessanne Chin’s homecoming concert, following her successful run on the award-winning US talent show The Voice. Marshall is married to Chin’s sister, Tami and they have a young son together, Jaxen. Gio’s mother is former Miss Jamaica Regina Beavers.