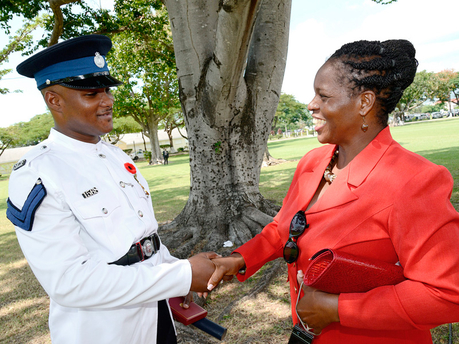 This week’s image comes from the Tuesday Gleaner story entitled I Did It For My Girl: Corporal Found Strength In Daughter To Battle Gunman In Fight Of His Life. Special Corporal Jermaine Burgher has credited the love for his daughter as the reason he is still alive today, after he was shot three times while travelling on a bus in St Catherine last June.

Burgher received a Medal of Honour for Gallantry during the Ceremony of Investiture and Presentation of National Honours and Awards at King’s House on Heroes Day. Here, he is being congratulated by Special Sergeant Paulette Smith-Mullings.

Click here for more highlights of the awards ceremony.