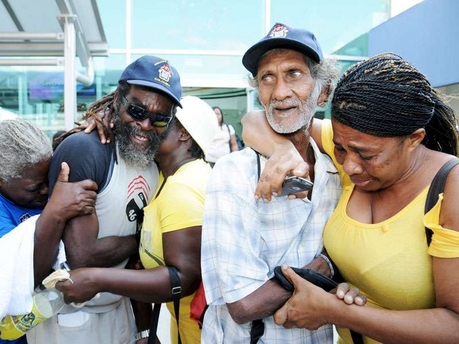 Our image of the week is taken from Today’s Sunday Gleaner:  Home At Last! Fishermen Drifting At SeaFor Days Rescued And Returned Home

The caption read:  Everton Gregory (second left) and John Sobah (second right) are hugged by family and friends after they returned to Jamaica following an almost month-long ordeal. – Gladstone Taylor/Photographer

The story said: The two men had embarked on a one-day trip to sea which became an almost month-long ordeal…The boat drifted for more than 20 days and more than 500 miles with the two men reporting that they survived by eating dried fish and sipping melted ice from their cooler… They were brought home by Food For The Poor.

Explore our Food For The Poor directory entry to learn about their services, social links, board members and more.