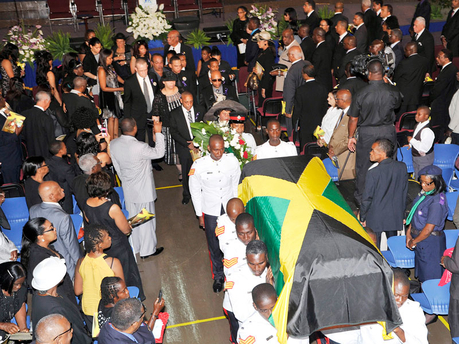 This week’s image comes from Monday Gleaner story  Monument Proposed As Cecil Charlton Laid To Rest. The photo shows the family members of former Mandeville Mayor Cecil Charlton flagging either sides of his coffin during his official funeral at the Northern Caribbean University in Mandeville, Manchester on Sunday, October 6. The former mayor was ailing for some time and died in hospital September 12, 2013 at the age of 88. A businessman and former chairman of the National Water Commission, Charlton is credited as one of the most popular mayors of Mandeville.

Charlton’s political career also saw him receiving the title of  the ‘Mandeville Superman’.