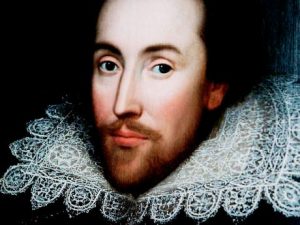 Imagine what would happen if William Shakespeare decided to visit modern-day Jamaica. Can you visualise his utter discombabulation as he tried to figure out what these people were trying to say? Can you see how Jamaicans would ‘eem’ and ‘ahm’ as they tried to translate his Olde English speech? The thought alone is probably humour enough. But why stop there? Let’s explore what would happen if the world’s most beloved Bard decided to venture into 21st-century Jamaica and impart his wisdom in patois. Here we have some examples of the messages that he might share, and their patois equivalent.

Shakespeare: “To thine own self be true, and it must follow, as the night the day, thou canst not then be false to any man.”
Jamaican: Nuh care how hog try fi hide under sheep wool, him grunt always betray him.
Translation: No matter how a pig tries to disguise himself under sheep wool, his grunt will always give him away.
Meaning: Do not pretend. Be true to who you are, because your real self will always come out eventually. Just be yourself from the get-go. Or else, like the pig pretending to be a sheep, your grunt will give you away. The bard might not be too pleased with the less-than-poetic delivery.

2. Thinking makes it so

Shakespeare: “There is nothing either good or bad, but thinking makes it so.”
Jamaican: Belief kill and belief cure.
Translation: Belief kills and belief cures.
Meaning: What you believe creates your reality. How you perceive your world is dependent on how you think.

3. You don’t know what the future holds

Shakespeare: “We know what we are, but not what we may be.”
Jamaican: Pig ask him modda why him snout so long, shi seh when yuh grow, yuh wi know.
Translation: The pig asked his mother why his snout was so long and she said when he grows up, he will realise why.
Meaning: Even if we understand what we are today, we cannot predict what will happen in the future. Things that seem one way now may take on new significance in the future.

4. Treat all people with respect

Shakespeare: “Love all, trust a few, do wrong to none.”
Jamaican: Nuh ramp wid mawga cow, a coulda bull mumma.
Translation: Do not mess with a skinny cow, it could be a bull’s mother.
Meaning: The bottomline is to treat all people with respect – regardless of how worthy or unworthy they may seem. That’s why Shakespeare said “love all” and “do wrong to none”. The Jamaican is a bit more explicit: be careful how you treat people, because the ones who look like they can be victimised may very well be connected to much more powerful people.

5. Anything can happen to anyone

Shakespeare: “Some rise by sin, and some by virtue fall.”
Jamaican: Donkey seh worl nuh level.
Translation: Donkey says the world is not level (balanced).
Meaning: Shakespeare is noting that some people achieve success through devious, less-than-honourable means (“rise by sin”), while those who practise integrity can still end up unsuccessful. The Jamaican equivalent notes that donkey (a voice of wisdom) says the world is not level. It is possible for you to do everything right and still end up failing. It is possible for those who cheat and practise corruption to be successful. It’s just the way the world is – even if we feel like this is unfair.