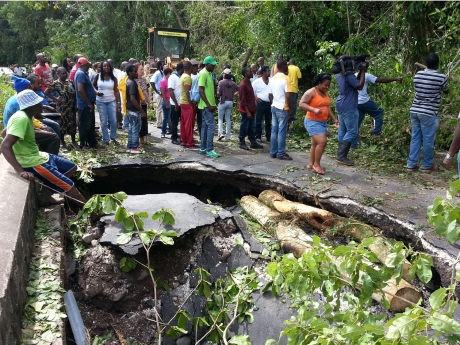 It is not well known that our rigorous four-year Extended Fund Facility (EFF) agreement with the International Monetary Fund (IMF) comes with no provisions for external economic shocks such as a hurricane.

While the IMF agreement does not make any specific provisions for natural disasters such as hurricanes it does however:

Under the programme, Jamaica is expected to foster economic growth while lowering its debt. Over the next four years, the nation has very little wiggle room for any unfavourable contingencies. Through the life of the programme, the nation must achieve a primary surplus that is equal to at least 7.5% of its gross domestic product (GDP) starting this year. Additionally, Jamaica must stabilize its inflation rate to around 8% and reduce public debt to 96% by 2020. We must achieve these tasks while facing and passing a myriad of criteria and quarterly tests in order to successfully complete the programme.

As a nation that has been ravaged by the likes of the infamous Hurricanes Gilbert, Ivan, Dean, Nicole and Sandy just to name a few, a contingency plan seems like a must. As a matter of fact, in the last decade alone, Jamaica has experienced hurricane or tropical storm conditions in 2004, three in 2005, 2007, 2008, 2010 and 2012. According to the PIOJ, in total, these storms cost Jamaica over J$113B, and that is before being adjusted for inflation.

It is thought provoking that after analysis of the IMF agreement and the annual budget for the 2013/2014 fiscal year, there is no evidence of any substantial allocations put in place by the GOJ. Only J$229M has been allocated to the Office of Disaster Preparedness and Emergency Management (ODPEM) in FY 2013/14. This represents their entire allocation regardless of the type of natural disaster, not just in the event we have a major event (hurricane/tropical storm) or minor event (extensive period of heavy rains) this hurricane season.

Each time there is a storm, thousands of people are left homeless, roads and other infrastructure are damaged, crop and livestock are lost, commerce is curtailed and Jamaica’s GDP takes a few steps backwards. Those are just the short-term effects. The long-term effects include damage to Jamaica’s already pressured coral reef system and continued beach erosion around the island. Given that Jamaica has faced hurricane conditions repeatedly over the last decade, it would be prudent management on the part of the GOJ to include a provision for such a disaster.

There is no evidence that the IMF would be willing to give some leniency in the case of a disaster. In the case of Hurricane Gilbert, the IMF agreed to a 20 month Stand-By Arrangement exactly one week after the passage of the mighty Gilbert. In the face of complete disaster, the IMF agreed to waive our criteria and tests for March 1989, and resumed testing in June 1989. Although Jamaica had been given a reprieve, the country did not recover to meet the IMF’s criteria or tests and therefore the 1988 Stand-By Arrangement was cancelled at the end of September 1989 for breaching NIR targets.

To be fair to the GOJ, it would be hard to include a provision for a disaster, especially the size of Hurricane Gilbert. For many people, Hurricane Ivan (2004) sets the benchmark for recent hurricanes, costing the nation J$35B in 2004. Ivan did extensive damage to agriculture, housing, mining, electricity, transport, telecommunications and tourism. 36% of the total damages was related to the productive sector, while 27% or J$9.8B was damages to GOJ owned property.

Hurricane Dean (2007), cost the country approximately J$23B, out of which the productive sector sustained damages worth J$11.5B, or 50% of the total. Damage to public roads, water supplies, hospitals and schools which would be the responsibility of the GOJ amounted to J$4B. As a result, the GOJ had to seek out a US$10M (approximately J$700M) loan from the World Bank. We just began to repay this loan in 2012.

Hurricane Nicole (2010) cost nearly J$18.7B in damages in terms of cost to the public purse (roads, water supplies, hospitals, schools, ports, relief assistance), J$17B of which was damage to public roads, bridges and other related infrastructure. In order to put Hurricane Nicole in context, let us examine the entire budget for the Ministry of Transport, Works and Housing (including Government of Jamaica funded projects and externally funded projects). While Nicole cost the country J$17B in road works alone in 2010, the Ministry of Transport, Works and Housing has a budget for 2013-14 of J$18B.

With the focus on cutting our import bill and boosting local exports it is important to highlight the impact of hurricane damage on the nation’s fragile agriculture industry, particularly the export sub sector which mainly comprises of bananas, bauxite and coffee. Bananas and coffee usually recover from hurricane damage at a slower pace than other sectors of the economy. You would have seen evidence of this by the recent influx of banana vendors at major intersections as the crop is only just now recovering nine months after the effects of Hurricane Sandy.

To shed even more light on the severity of this situation let’s have a look at Hurricane Sandy. Damage sustained from Sandy was concentrated in the eastern parishes of Portland, St. Mary and St. Thomas, yet the hurricane totalled J$9.7 billion in costs, imagine if it was a more severe hurricane such as Ivan?

We at diGJamaica think it is important that as we enter into the heart of the hurricane season, Jamaicans needs specific answers from the GOJ as to the plan in the event we are impacted by a hurricane or severe rains.  What is our backup plan?