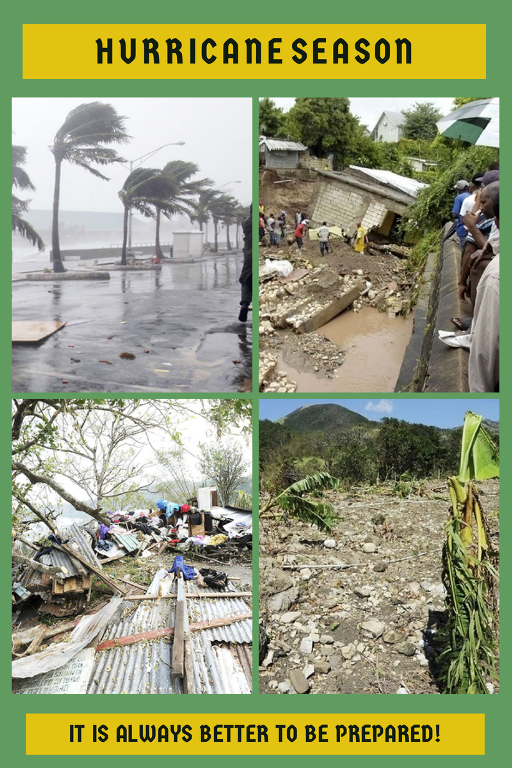 Every June, millions of people in the regions of the Caribbean Seas, the Gulf of Mexico and the North Atlantic Ocean brace themselves for the Atlantic hurricane season, which begins on the first of the month and lasts until November 30th. During this seemingly interminable six-month period, areas (parishes, states, towns or even whole countries) in the ‘hurricane belt’ may be hit with anything from the full force of a Category 5 system or wind and rains from the outer bands of a Category 1 storm. Sometimes, an area might even be hit more than once, or be spared altogether. Expert predictions are often dire, especially in recent years where ‘above-average’ activity was anticipated – and the elements duly obliged.

Everyone would have breathed a collective sigh of relief upon finding out that the National Oceanic and Atmospheric Administration’s (NOAA) Climate Prediction Center is forecasting a near-normal or below-normal season. This means a total of eight to 13 named storms, with three to six developing into hurricanes and one to two intensifying into major hurricanes of Category 3 or higher. Last year’s predictions were 13 to 20 tropical storms, of which seven to 11 were expected to become hurricanes and three to six to become major hurricanes.

According to the NOAA’s release:

The main driver of this year’s outlook is the anticipated development of El Niño this summer. El Niño causes stronger wind shear, which reduces the number and intensity of tropical storms and hurricanes. El Niño can also strengthen the trade winds and increase the atmospheric stability across the tropical Atlantic, making it more difficult for cloud systems coming off of Africa to intensify into tropical storms.

This is certainly a bit of good news to start with. However, it does not mean that we should dismiss the ever-eminent threat of hurricanes during this time. The weather is notoriously unpredictable and, as we say here in Jamaica, “any card can play.” While there may be fewer storms than in previous years, those that do develop may be quite intense, or they may come with lingering rains that end up causing serious damage. Until 2012, Jamaica had not been directly hit by a hurricane since Gilbert in 1988, but we saw the destruction wrought by Hurricane Sandy, which was only Category 1 at the time. And even the outer bands of rain and wind from other storms have caused severe damage over the years in between.

Jamaica cannot afford to be caught flat-footed at this time, but due to the state of the economy and our current IMF agreement, we are in a perilous position. The four-year Extended Fund Facility (EFF) agreement with the International Monetary Fund comes with no provisions for external economic shocks such as a hurricane. Government agencies repeatedly assure us that they are “committed to strengthening the resilience of the country to natural disasters through Climate Change Adaptation and Disaster Risk Reduction initiatives and targeted public infrastructure projects with explicit incorporation in annual budgets of central government or public entities.” However, one of the lead stories in today’s Gleaner, Disaster Waiting to Happen, sees local experts again sounding the call for proper enforcement strategies to ensure that people stop building in vulnerable areas, such as near gullies and other flood-prone areas, and for a more comprehensive evacuation and relocation plan. These problems rear their ugly heads every year, yet nothing seems to be done to address them.

Therefore, we have to take matters into our own hands as much as possible and make the necessary preparations, in order to avoid being at the mercy of the storms or needing to be rescued. Take responsibility for your own safety and, wherever possible, to lend a hand to your neighbours. diGJamaica has compiled a list of practical tips and checklists that can help you prepare for the season, and you may also find contact information for your parish’s Disaster Coordinators. Remember, an ounce of prevention is worth a pound of cure. It is always better to be prepared and not face the anticipated storm, than to have no preparations in place and watch the storm destroy your life.