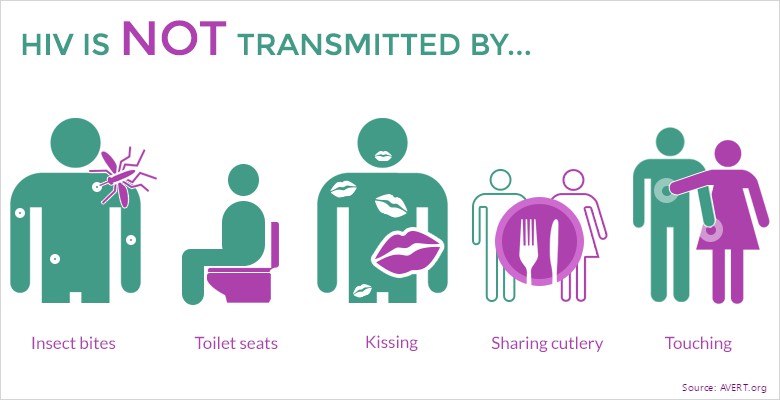 The campaign to end the AIDS epidemic by 2030 has been been having major success in many countries around the world. We looked at some of the facts and figures in our World AIDS Day 2015 fact sheet. However, one of the biggest obstacles to the success of the campaign is dispelling the myths that abound about HIV and AIDS. Many people hold beliefs that actually contribute to the spread of HIV and other sexually transmitted infections (STIs) as they tend to disregard the facts and messages geared towards behaviour change.

See some of these myths below:

1) Having sex with a ‘virgin’ will cure HIV/AIDS

Not only is this wrong, but it is dangerous as it endangers young women and girls who may become rape targets for their purity – real or perceived.

2) Only homosexuals, drug users, promiscuous people and prostitutes can get HIV

Some people have a higher risk of getting HIV because they engage in certain activities such as injecting drugs, having multiple sex partners without condom use or are commercial sex workers. However, that doesn’t mean they are the only ones at risk.

It can take up t0 10 years for symptoms of HIV to show up, which means someone could be carrying the disease for a long time without experiencing or showing any warning signs. Additionally, only about 53 per cent of people with HIV know their status.

4) HIV can be spread by insect bites

You cannot get HIV from insects. When an insect (such as a mosquito) bites you it sucks your blood – it does not inject the blood of the last person it bit.

HIV can’t survive outside of the body, so you won’t get HIV from touching, hugging or shaking someone’s hand. It also cannot be spread by sharing utensils, using the same bathroom, drinking from the same cooler or working in the same environment.

6) One cannot get HIV from oral sex

As with kissing, the risk of HIV from oral sex is small unless you or your partner have large open sores on the genital area or bleeding gums/sores in your mouth. Always use a condom or dental dam to eliminate the risk.

There are many strains of the HIV virus. If you get infected with 2 or more strains of HIV it can cause problems for your treatment. Make sure you are still using condoms if you and your partner are living with HIV.

8) HIV/AIDS can be cured

Proper antiretroviral therapy will cure HIV. ARTs are medicines used to slow the rate at which HIV multiplies inside the body; they do not eradicate the virus. And neither will ‘bush medicine.’

9) HIV is a death sentence

That may have been the case in the early days, but now, with various ARTs on the market at different price points, it is possible to live a long, healthy life while having HIV. ARTs also help to prevent mother-to-child transmission of the virus during birth and breastfeeding.

Many Jamaicans are avid conspiracy theorists who use the fact that the highest HIV infection rates can be found in Africa as the basis of claims that the virus was developed to wipe out the black race. This belief can also be found amongst many communities worldwide. In one US study, as many as 30 per cent of African-Americans and Latinos expressed the view that HIV was a government conspiracy to kill minorities, which tend to experience disproportionately higher rates of infection than whites. However, the correlation is largely due to socio-economic issues such as poverty, as well as factors like stigma, fear, discrimination, homophobia, and negative perceptions about HIV testing.