On the cusp of Christmas and the end of 2016, Jamaicans had a mild panic attack about the possibility of ‘plastic rice’ circulating on local markets. This led to the Jamaica Customs Agency (JCA) temporarily ceasing the clearance of rice at all ports of entry (The Gleaner, Mon, Dec 12, 2016). Later, the government issued a statement saying that  from tests done so far, they had found no evidence of ‘plastic rice’ on the local market (The Gleaner, Tues, Dec 14, 2016).

What triggered the panic was a video made by a woman from Manchester and circulated on social media, claiming that she had unknowingly purchased ‘plastic rice’. There have been videos on YouTube and other places online showing persons from different Asian countries allegedly making fake rice from plastic and styrofoam and mixing it in with the real product for sale and export. Mild panic ensued. The JCA and Government were quick to respond, but for those who were around in the 1970s, memories of Jamaica’s ‘Poison Flour’ saga were awakened. 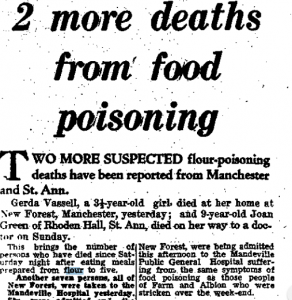 The ‘Poison Flour’ saga occurred in Jamaica in and around the 1970s when shipments of flour contaminated by insecticide parathion were unwittingly sold to merchants in the island. The flour came into contact with Parathion when they were stored next to each other in a warehouse in Europe after milling. Newspaper reports from as early as February 7, 1968 report deaths from flour poisoning, concentrated in Kingston and Manchester, in persons who had purchased flour from a corner shop in Spanish Town. The report also listed over 20 persons, including children, who were hospitalised after showing symptoms of food poisoning from consuming flour-based products.

Later reports came in January and February 1976, when the Minister of Health ordered a stoppage on sale of counter flour in the island, pursuant to a full probe into the issue.

“Following the first outbreak of food poisoning in Dalvey early in January, a full and thorough investigation had been ordered by the Minister of Health so that the contaminated flour could be traced, indentified and removed from circulation. “The experts did not in fact complete the laborious and painstaking process involved until late on Friday and then on Saturday morning we  were struck by this further tragedy”,’ the Prime Minister said. (The Gleaner, January 26, 1976) 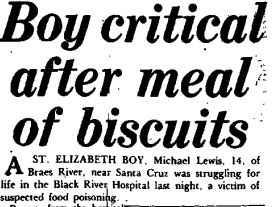 It is reported that a total of 79 persons were poisoned from the contaminated flour, and 13 died. In the 1970s, the incident seems to have mainly centred around a family tragedy in St Thomas.

For copies of the full news pages and reports on the 1970s flour poisoning in Jamaica, please contact The Gleaner Library & Archives (website: www.jamaica-gleaner.com/library, Tel: 922-3400 ext 6078)