Doug E Doug – Actor, comedian, screenwriter, producer and film director Douglas Bourne, more popularly known as Doug E Doug, was born in Brooklyn, New York to a Jamaican father and African-American mother. He has appeared in a number of films, but is most popularly known locally for playing Sanka Coffie in Cool Runnings, the Disney film loosely based on Jamaica’s first bobsled team, which competed at the 1988 Winter Olympics in Calgary, Canada. In addition to Cool Runnings, Doug’s other movie credits include Jungle Fever (1991), Hangin’ with the Homeboys (1991), Class Act (1992), Operation Dumbo Drop (1995) and Eight Legged Freaks (2002). 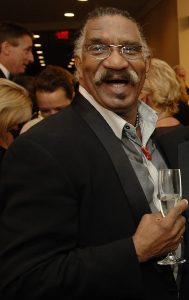 Garth Fagan – The highly regarded founder and artistic director of Garth Fagan Dance, an award-winning and internationally acclaimed  modern dance company based in New York, was born  in Kingston, Jamaica. He studied under the direction of the illustrious Ivy Baxter at the Jamaica National Dance Company while attending Excelsior High School before emigrating to the United States, where he attended Wayne State University in Detroit, Michigan. Over the course of his career, Fagan has choreographed for the Dance Theatre of Harlem, the Alvin Ailey American Dance Theater, the Limón Dance Company and more. His choreography incorporates elements of modern dance, ballet, African and Caribbean dance and social dance. Fagan was presented with the Order of Distinction, Commander Class in 2001.

Jackie Guy – Carlton ‘Jackie’ Guy, is a Jamaican dancer, choreographer and teacher who has been based in the United Kingdom since the mid-1980s. Guy grew up in the Harbour View area and took up dancing as a boy, inspired by the film West Side Story. He was the founding artistic director of the University of the West Indies (UWI) Dance Society and former principal dancer with the National Dance Theatre Company (NDTC). He is the recipient of several awards for outstanding contribution to dance and theatre and has often been praised for his dedication and contribution to the development of dance of the African diaspora in the UK. Guy was conferred with the Member of British Empire Award (MBE) in 2012.

Naomie Harris – Harris’ Jamaican accent was spot on in the Pirates of the Caribbean movies and with good reason: the British actress was raised by her Jamaican-born mother, screenwriter Lisselle Kayla. In addition to the Pirates franchise, Harris has appeared in a number of other films, including 28 Days Later, the 2006 remake of Miami Vice, alongside Jamie Foxx and Colin Farrell also played Eve Moneypenny in the 2012 James Bond movie, Skyfall, opposite Daniel Craig and took on the iconic role of Winnie Mandela opposite Idris Elba in Mandela: Long Walk to Freedom.

DJ Kool Herc – Clive Campbell, better known as Kool Herc, is the man credited with originating hip hop music in the US in the early 1970s. He was the first of six children born to Keith and Nettie Campbell in Kingston. The family emigrated to the Bronx, New York, when he was 12 years old. Using two copies of the same record, Herc focused on a short, heavily percussive part of the track, called the ‘break,’ which he isolated before changing to the other record. As one record reached the end of the break, he cued the other record back to the beginning of that break, thereby prolonging it. He also contributed to developing rap, by punctuating the recorded music with ‘toasting’ or deejaying.