Claudia Gordon – Gordon was the former Special Assistant to the Director of the Office of Federal Contract Compliance Programs (OFCCP). Last July, she was appointed the associate director in the White House Office of Public Engagement. Gordon was born in rural Jamaica. She lost her hearing at the age of eight and the discrimination she faced growing up compelled her to become a lawyer. She emigrated to the US at age 11 and learned sign language at New York’s Lexington School for the Deaf and later became the first deaf student to graduate from the American University’s Washington College of Law. 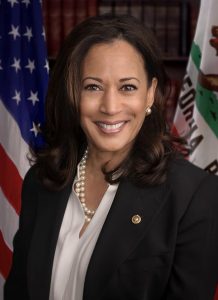 Kamala Harris – On January 3, 2011, Harris, the daughter of a Jamaican-American father and an Indian mother, became the first woman, the first African American, and the first South Asian to hold the office of Attorney General in the history of California. She held the office of District Attorney of San Francisco from January 2004 to January 2011. Harris, an early supporter of President Barack Obama’s campaign, was selected to deliver a keynote address at the 2012 Democratic National Convention. Harris firmly believes that the most effective method of stemming crime is to address the social issues underlying criminal activity. In her inauguration address, she spoke to the need to provide more drug rehabilitation, education and job training to people leaving lock-ups.

Colin Powell – Powell became the first African American appointed to the position of United States Secretary of State (2001-2005), where he served under President George W Bush. The son of two Jamaican immigrants, he was raised in the South Bronx. A retired four-star general of the US Army, Powell’s 35-year military career included two tours in Vietnam. He also acted as President Ronald Reagan’s National Security Advisor from 1987 until 1989. His term as Secretary of State is most remembered for the US Army’s action against al-Qaeda, following the September 11, 2001, terrorist attacks. He is a cousin of actress Kerry Washington.

Angella Reid – Reid was appointed the first female White House chief usher in October 2011. A native of  Trinityville, St Thomas, Reid is a hospitality industry veteran who got her start as a front office trainee at the Half Moon hotel in Montego Bay in 1978. With 25 years of hotel management experience and several leadership awards, she oversees management of the Executive Residence to ensure activities and resources are used efficiently and effectively and maintains close liaison with the White House Historical Association, the Committee for the Preservation of the White House, the U.S. Commission of Fine Arts, among other entities.

Corbin Bleu – Born Corbin Bleu Reivers to an Italian-American mother and a Jamaican-American father, he is best known for playing the character ‘Chad Danforth’ in Disney’s hugely successful High School Musical series. He has also appeared on Broadway twice, playing ‘Usnavi’ in In The Heights and ‘Jesus’ in Godspell. Bleu is an all-rounder in the entertainment industry as a film and stage actor, dancer, singer and songwriter. His father David is also an actor and the two have appeared together in High School Musical 3 and another Disney movie, Jump In! Bleu was most recently a competitor on popular dance competition show, Dancing with the Stars, where he placed second.