Lianne La Havas – Born Lianne Charlotte Barnes to a Jamaican mother and Greek father in London, La Havas’ stage name comes from the latter’s Vla Havas. Her debut album Is Your Love Big Enough? debuted at number four in the UK, amidst critical acclaim, with the hit singles Lost and Found, Forget, No Room For Doubt and Age. It was named iTunes Album of the Year in 2012. She wrote her first song at 11 and learned to play the guitar at 18. She also counts the legendary Prince as a fan. Her second album is coming soon.

Carl Lumbly – Carl Winston Lumbly was born to Jamaican immigrants in Minneapolis, Minnesota. After graduating college, he was working as a journalist when an assignment to write about a workshop theatre proved to be life-changing as he cast as an actor. His first major acting role was on the 1980s television series Cagney & Lacey as Detective Marcus Petrie. That job was also life-changing as he met his wife, the late Vonetta McGee of blaxploitation film fame, on set. His next big role was in LA Law, in which he played a teacher falsely accused of the rape/murder of a female student. Lumbly’s two most visible roles would come in the 2000 Disney movie The Color of Friendship, in which he portrayed activist and Congressman Ron Dellums, and in the 2001-2006 TV series Alias, alongside Jennifer Garner. He is also a respected stage and voice actor, working on series such as The Wild Thornberrys and Static Shock and Justice League as the voice of J’onn J’onzz, the Martian Manhunter.

Christopher ‘Kid’ Reid – The former rapper, actor and comedian famous for his hi-top fade haircut was born in The Bronx to a Jamaican father and an Irish mother. He is best known as one-half of late-1980s/early-1990s hip hop act Kid n Play, with fellow rapper Christopher ‘Play’ Martin. Together, they starred in the comedy movie House Party and its sequels. The duo released three albums: 2 Hype, Kid ‘n Play’s Funhouse and Face the Nation. Reid has also appeared in sitcoms like Sister, Sister and Martin. He currently works as a standup comedian, voice actor and radio show host. His most recent musical contribution is co-writing the theme song for HBO’s Real Time With Bill Maher.

Busta Rhymes – The rapper, famous for his lightning-fast rhymes, was born Trevor Taheim Smith in Brooklyn, New York to Jamaican parents. His first break into the music industry came in 1989 as part of the rap group Leaders of the New School, which toured with Public Enemy. The group released two albums before disbanding in 1993. His solo career took off two years later with Woo Hah! Got You All in Check from his album The Coming. His 1997 follow-up When Disaster Strikes featured the hits Put Your Hands Where My Eyes Can See and Fire It Up! He released seven more solo studio albums, alongside a greatest hits collection and collaborations with his group Flipmode Squad, but his last big hits came in the early 2000s with Pass the Courvoisier (2001) and Make It Clap (2002). Rhymes has also appeared in a number of films including Shaft, The Rugrats Movie and Finding Forrester, as well as TV shows such as Cosby, The Wayans Bros and The Steve Harvey Show. 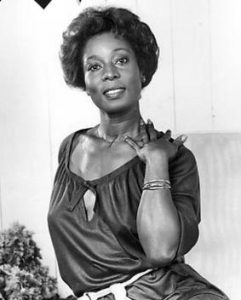 Madge Sinclair – Born Madge Dorita Walters in Kingston, Sinclair was a teacher for a number of years before she migrated to pursue her acting career. Her outstanding 27-year career included some 40 movie and television programme credits, and she will always be remembered for iconic roles such as Mrs Scott opposite John Voight in Conrack, Ernestine Shoop in Trapper John, MD, Kunta Kinte’s mother Belle in Roots, Prince Hakeem’s mother Aeoleon in Eddie Murphy’s Coming to America and the voice of Simba’s mother Sabari in The Lion King. Sinclair was thrice nominated for an Emmy Award and finally copped the Outstanding Supporting Actress in a Drama Series prize for her role as Empress Josephine in the 1990 television show Gabriel’s Fire. She died in 1995 from leukemia.

Zadie Smith – The acclaimed author and writing professor was born Sadie Smith in London to a Jamaican mother and an English father. She changed her first name to Zadie at 14 years old. Smith famously wrote her best-selling, multi-award winning debut novel White Teeth while a student at King’s College, Cambridge. The partial manuscript had started a bidding war amongst tp UK publishers, with Hamish Hamilton coming out on top. She has written three other novels and a novella: The Autograph Man, On Beauty, NW and The Embassy of Cambodia, respectively, all to critical acclaim. Her other writings include the non-fiction collection Changing My Mind, and essays for various newspapers and magazines. Smith visited the United States as a 2002–03 Radcliffe Institute for Advanced Study Fellow at Harvard University, taught fiction writing at Columbia University and is now a tenured professor of fiction at New York University.