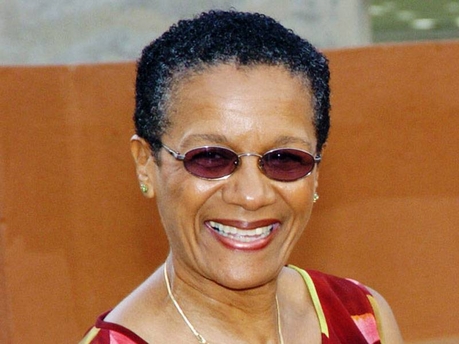 Sister Mary Ignatius Davies – Sister Ignatius’ name is synonymous with the Alpha Boys’ School she served with great distinction from 1939 until her death in 2003. She was responsible for the school’s music programme that changed the lives of so many so-called wayward boys, and put them firmly on the path to iconic status themselves. Read more here.

Fae Ellington – Fae Audrey Ellington was born on May 28, 1953 in Smithville, Clarendon. She is a revered Jamaican personality whose career has encompassed broadcasting, teaching and acting, a path which has made hers a household name. She is also an emcee par excellence, called on to host many major national events. Ellington voiced her first commercial (for Canada Dry ginger ale) while in third form at St Hugh’s High School, for which she was paid three guineas. In 1974, Ellington joined the Jamaica Broadcasting Corporation (JBC), eventually hosting Morning Time for more than a dozen years. In 2005, she made her directorial debut, when she staged the one-woman show Who Will Sing for Lena, for which she received an Actor Boy nomination. Ellington also lectures at the Caribbean Institute of Media and Communication (CARIMAC) at the UWI. Read more about this bold one here.

Barbara Gloudon – Barbara Joy Gloudon wears several hats, including that of journalist, playwright and cultural activist. She is familiar to most Jamaicans as a voice, coming into many homes daily on RJR’s call-in talk programme, Hotline. She is also well known as the woman behind the Little Theatre National Pantomime, where her dedication to preserving the cultural authenticity of Jamaican theatre is evident. She is the author of more than 22 LTM Pantomimes, including Hail Columbus (1972), Trash (1985), 50 Fifty (1990), Combolo (2003), Runner Boy (2008), Skoolaz (2012) and the current production, The Golden Maccafat. Read more about Gloudon here.

Kellie Magnus – Kellie Magnus, daughter of the famous broadcaster Alan Magnus, became a children’s books author after an eye-opening conversation with her young niece. Magnus was appalled that there were insufficient Jamaican children’s books available to inspire Jamaican children about our culture. Her books include Little Lion Goes to School, Little Lion at Bat and Little Lion Goes for Gold. Magnus holds an undergraduate degree from Harvard University and an MBA in entertainment and media management from Columbia University. She has worked on a series of children’s books and parents’ manuals that formed part of a multimedia programme, ‘Max and Friends’ specially designed for children with autism and related developmental disabilities. Magnus also writes features on Caribbean entertainment and media, and has been published in local, regional and international papers and magazines. Read more about her here.

Jody-Anne Maxwell – Prior to May 28, 1998, most Jamaicans – indeed, most people  the world – had never even heard the word CHIAROSCURIST before. However, it soon became etched in the minds of many after Jody-Anne Maxwell, then a 12-year-old student at Ardenne High School, spelled it correctly to win the Scripps Howard National Spelling Bee. In the process, she became – and remains – the only non-American to claim the trophy in the competition’s history. She is now an attorney-at-law, with a degree from the UWI’s Norman Manley Law School. Read more about Maxwell h-e-r-e.

Alma Mock-Yen – She has been fittingly dubbed the ‘arbiter of media’ and the doyenne of contemporary media. This is little wonder as Alma Mock-Yen was at the forefront of the media fraternity in Jamaica, and, by extension, the Caribbean, as she a pioneering broadcaster and lecturer at CARIMAC at the UWI. There she is credited as one of the persons who were instrumental in the establishment of distance education at the University. Recruited as one of the first persons of colour to work at RJR, Mock-Yen and Ranny Williams pioneered the Jamaican radio drama Life With The Morgan-Henrys which aired on Sundays. She was also a dancer and composer – she wrote the libretto and lyrics of Jamaica’s first integrated musical Once Upon A Seaweed produced by Noel Vaz at the Ward Theatre in 1960.Read more about the media queen here.

Audrey de Sola Pinto – Audrey Pinto’s name is synonymous with Wolmer’s Girls’ School, which she led with a will of steel and an iron fist from 1962-1984. She was a strict disciplinarian with very definite views about the risks associated with young girls growing into adulthood and how to safeguard against them. Ms Pinto believed that the purpose of education was “to aim for excellence within your capabilities and to educate the children to face the realities of life.” During her tenure, Wolmer’s Girls flourished in the arts and culture and experienced a renaissance in sports well beyond traditional netball and tennis. Read more here.