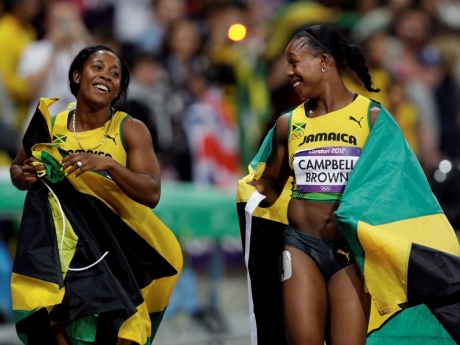 Alia Atkinson – The sport of swimming may not be the most popular among Jamaicans, but Alia Atkinson is improving its profile almost single-handedly. The swimming sensation debuted at age four at the Y-Speedos Club in Jamaica, and today, in her mid-20s, she is a dominant world force in her field, winning medals and setting benchmarks in the pool. On December 6, 2014, Atkinson won gold in the 100m breaststroke at the FINA World Short Course Championships in Doha, Qatar, making her the first black woman and first Jamaican to win a swimming world title. To make her accomplishment that more impressive and historic, Atkinson equalled the world record of 1:2.36. She is an advocate for minority swimming in the US, where she lives and trains, and has her own foundation which provides training for children. She also helps to write and promote learn-to-swim books for children. For her accomplishments, Atkinson was recently presented with the 2014 The Gleaner Honour Award for Sports. Read more about Jamaica’s ‘water baby’ here.

Veronica Campbell-Brown – Veronica Campbell-Brown was born on May 15, 1982, in Trelawny. The parish is also the birthplace of a number of other outstanding Jamaican athletes, most notably Usain Bolt. Campbell-Brown rose to national prominence as a student at Vere Technical High School in Clarendon. She not only helped the school secure back-to-back victories at the Boys and Girls Championships in 2000 and 2001, but won several World Youth and World Junior titles during her student years. One of the most successful sprinters in history, Veronica Campbell-Brown has been a force since her high school days. She is one of only nine athletes in the world to win world titles at the youth, junior and senior level of an athletic event and, with the exception of the Commonwealth Games, she has won multiple gold medals at all other international competitions. Her previously unimpeachable image suffered a blow in 2013 when she reported tested positive for a banned substance. She has maintained her innocence and the proposed ban has since been overturned. Read more about VCB here.

Shelly-Ann Fraser-Pryce – The little dynamo burst unto the scene in 2008 at the Jamaican Olympic trials and has since carved out one of the most successful sprinting careers in the world. Born on December 27, 1986 in Kingston, Jamaica, this former Wolmerian was catapulted into the spotlight after becoming the first Jamaican to win the women’s 100 metre final at the Beijing 2008 Olympics. Fraser-Pryce was appointed the first national Goodwill Ambassador for UNICEF Jamaica on February 22, 2010. As a National Goodwill Ambassador of Jamaica, Fraser Pryce focuses on early childhood development and education. She created history at the 2013 World Championships in Moscow, Russia, winning the 100m, 200m and 4x100m events, becoming the first woman to complete the triple in a single World Championships.

Merlene Ottey – Merlene Joyce Ottey was born on May 10, 1960 in Cold Spring, Hanover. She attended Ruseas and Vere high schools, where she was began honing her skills as an athlete. Over the course of her career, Ottey has collected 35 medals in major international championships, including eight, a women’s record, over a 24-year period in the Olympic Games. In addition, she has won 14 medals in the World Championships, the most by any sprinter, male or female. Ottey’s senior international career began way back in 1979 and, at age 53, she has still not announced her retirement. The legend’s first great performance came in 1980 at the Moscow Games, where she placed third in the 200m to become the first English-speaking Caribbean woman to win a medal at the Olympics. She won her last medal, a bronze and a silver, at the 2000 Sydney Olympics in the 10om and 4x100m relay, respectively. Ottey currently represents Slovenia, where she has lived since 1998 and became a citizen in 2002. She first represented her new country at the 2004 Athens Olympics. Read more about the iconic sprinter here.

Molly Rhone – Born in Manchester, she began playing netball as a student at the Knox Community College, making the senior team by the age of 13. Rhone’s netball career involved playing at the Under-21 and Under-23 levels, captaincy of Jamaica’s reserves team and vice captaincy of the team that contested the 1975 World Netball tournament in New Zealand. Rhone made sporting history in 2003 when she was selected to head the International Federation of Netball Associations (IFNA) at its congress held in Jamaica – the first and only Jamaican to head an international sporting body to date. In 2011, she received Jamaica’s fourth higest honour, the Order of Jamaica, at the Jamaica National Honours and Awards Ceremony, for services locally and internationally, in Sports Administration, in particular netball. Read more about the trailblazer here.

Trecia-Kaye Smith – Smith leapt to national attention in 2005 when she claimed the triple jump gold medal at the 2005 World Championships in Helsinki, Finland. She was born November 5, 1975 in Westmoreland and attended Mannings School, where she was a standout netballer, representing the institution at two rural netball championships as a shooter and defender. Her knack for the long jump was discovered through inter-house sports. After leaving Mannings, Smith attended the University of Pittsburgh and now resides in the United Kingdom. She is the first Jamaican to take a medal of any colour in the triple jump at the World Championships. She is also a Commonwealth champion, having won the event at the 2006 and 2010 games. Read more about Smith’s early days here.

Stafanie Taylor – the 2011 and 2012 ICC Women’s Cricketer of the Year, Stafanie Taylor, has racked up many firsts since making her debut for the West Indies during their 2008 tour of Europe. Per ESPN CricInfo, the right-hander is the world number one in Women’s One Day International bowling, as well as the top T20 all-rounder. Taylor grew up in Gordon Pen in Spanish Town, St Catherine, where she played football at primary school before cricket piqued her interest. Read more about this big hitter here.